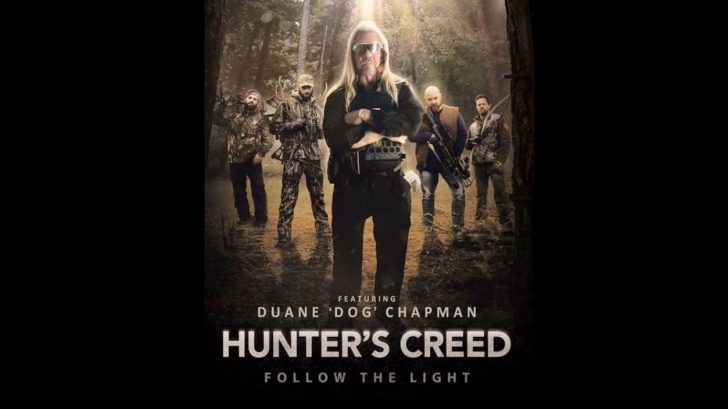 Duane “Dog” Chapman is known for his work on reality TV series such as Dog the Bounty Hunter and Dog’s Most Wanted. But now, the TV star is venturing into the movie world.

Dog has starred in a few movies before, including Austin High and Dog’s History of Bounty Hunting. But this new project will mark his first film appearance since 2016, when he appeared in the made-for-TV movie Sharknado 4: The 4th Awakens.

Deadline first published a report about Dog’s new project in November 2019, which was titled Hunting God at that time. Dog later confirmed his involvement in the film by sharing an image of a Blast article about the film on his official social media accounts.

Deadline says Hunting God is a “faith-based thriller” directed by Justin Jackola. In addition to Dog, other celebrities attached to the film include Wesley Truman Daniel, Ann Sonneville, and Mickey O’Sullivan.

The publication describes the premise of the movie as such:

“[Hunting God] follows a widower who reunites with his old church buddies to film a hunting show in the remote woods, where a supernatural presence forces him to confront his faith.”

As for Dog’s role in the film, he will actually play himself, rather than a character. Director Jackola spoke about how Dog enhanced the film, since Dog knows all too well what it’s like to be a widower. His wife, Beth, passed away in 2019.

“This isn’t your grandfather’s faith-based film,” Jackola said. “Our goal is to break the mold and hopefully inspire more fresh and innovative content. We’re thrilled to have Dog on board. He brings a level of understanding and compassion to the film no one else could match.”

Months passed before Dog spoke about Hunting God again. Finally, in July 2020, he shared an image reconfirming his involvement in the film, which now has a new name…Hunter’s Creed.

The U.S. Sun reported on Dog’s role in the film. “Dog filmed the first part of the shoot in 2018 and shot further scenes in November last year,” the publication states.

See a few posts Dog made about the film by scrolling below.

No release date for Hunter’s Creed has been revealed at this time.

So you may have to while before you get to see Dog on the big screen. In the meantime, entertain yourself by watching the below clip from his show Dog’s Most Wanted.