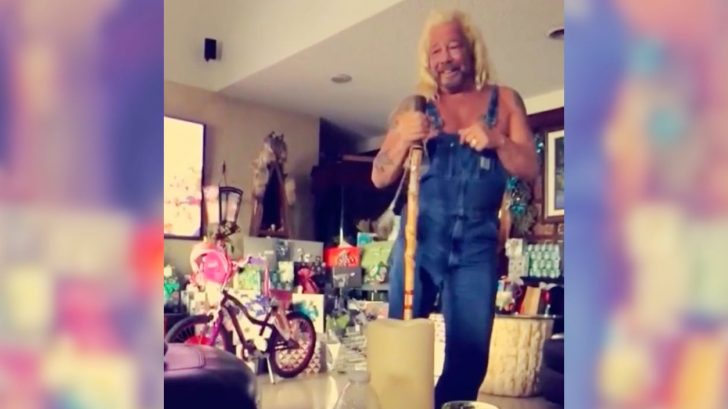 Dog The Bounty Hunter‘s daughter Lyssa has been one of his biggest champions lately. When he announced his engagement to Francie Frane earlier this year, Lyssa was one of the first people to celebrate the news on social media.

“Welcome to the fam Fran!” Lyssa wrote on her Instagram Story.

More recently, Lyssa came to Colorado to visit her dad and meet Francie for the first time. While speaking to The Sun, Lyssa said she and Francie hit it off right away.

Lyssa also brought her two daughters along on the trip, and they got the chance to interact with Francie as well.

Dog The Bounty Hunter's daughter Lyssa meets dad's fiancee Francie for the first time and they 'got on fabulously' https://t.co/nVANlp36GZ

Lyssa is no longer staying with her dad and Francie, but that didn’t keep her from celebrating Dog on Father’s Day this year!

On Father’s Day, Lyssa posted an old video of her father dancing. Dog ditched his shirt for his dance and was wearing nothing but a pair of denim overalls and some tennis shoes.

The Dog’s Most Wanted star was also holding a walking stick and used it as both a microphone and a guitar while he danced.

To match the hilarious video, Lyssa made a joke in her caption.

One of Dog’s other daughters, Cecily, offered some context to the clip with her comment.

Cecily wrote “Lmfao…this Christmas doe!” So while we don’t know the exact year that this video is from, we do know it was filmed around or on Christmas!

You can catch the clip of overall-wearing Dog’s Christmas dance below. We love seeing Dog’s silly side like this!

Happy Fathers Day DAD. Thanks to GOD for picking me to be be your daughter, and THANK YOU, for picking me as your favorite child ! 😆 Love you ! #DaddysGirl #MyDAD