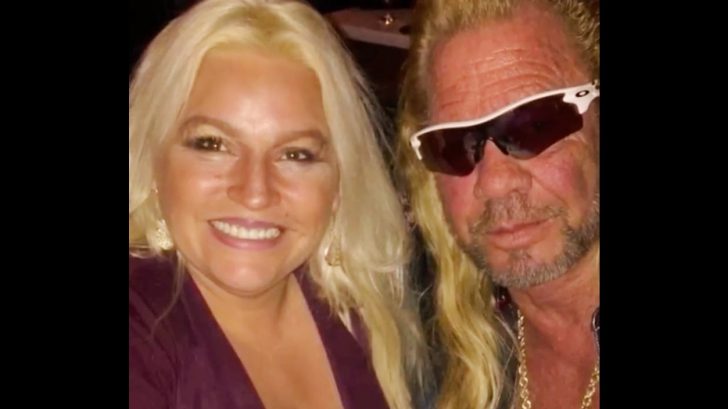 In late January, Duane “Dog” Chapman caused quite the stir when a teaser clip from an episode of The Dr. Oz Show appeared to show him proposing to his rumored girlfriend, Moon Angell. But fans learned the truth when the episode debuted on February 3.

It turns out that Dog’s proposal was fake. Even if it had been genuine, Moon rejected him, saying, “What? No. We’re friends, Duane. I love you as a friend.”

The reason why Dog’s fake proposal came as such a shock before anyone had any context is because his wife, Beth Chapman, just passed away in June following a long battle with throat cancer.

But Dog has made it clear that he still mourns and misses Beth.

Dog celebrated his 67th birthday on February 2. Even though he spent the day with friends and family, he was missing the one person who couldn’t be there…Beth.

On his first birthday without her, Dog took to Instagram to share an old photo of he and Beth sharing a kiss. He captioned the picture, “I sure miss you today !!“

I sure miss you today !!

Now, with Valentine’s Day approaching, Dog is missing Beth even more. He made that clear when he devoted a photo slideshow to Beth in honor of the romantic holiday.

“A lot of valentines days memories that will last forever,” Dog wrote in the slideshow’s caption. The pictures capture the relationship he and Beth shared, and show how deep their love was.

You can watch Dog’s sweet Valentine’s Day tribute to Beth below. She was such a strong, beautiful woman who is dearly missed.

As Dog prepares for his first Valentine’s Day without Beth, we’ll be keeping him in our thoughts and prayers.

A lot of valentines days memories that will last forever