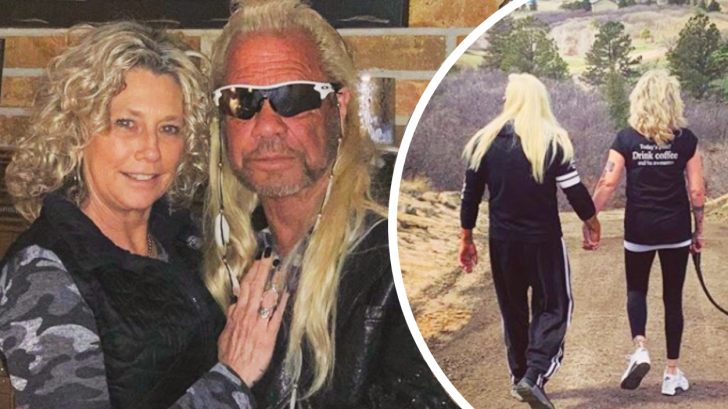 Congratulations are in order for Duane “Dog” Chapman…he’s engaged!

Back in March, Dog spoke to The Sun to announce he was in a new relationship with a woman named Francie Frane. He explained how they met, telling the publication he called Francie’s house in search of her husband, Bob, who used to do yard work for him at his house in Colorado.

Francie answered the phone, and told Dog the sad news that Bob had passed away. Dog lost his own spouse, Beth, in June of last year.

Dog and Francie formed a bond over their shared sorrows. That bond turned into friendship, and that friendship eventually turned into romance. By the time Dog spoke with The Sun in March, he said he saw his relationship with Francie heading toward marriage.

“There will never be another Mrs. Dog but it looks like there will be a final Mrs. Chapman,” he said.

Since going public with their relationship, the couple has appeared head-over-heels in love with each other.

In the caption to one photo he posted of Francie, Dog admitted that he still feels sad when he thinks about Beth. But he said Francie is able to make him smile again, and he loves her for that.

If it wasn’t obvious enough that Dog was smitten with Francie, he just made his devotion all the more clear by asking her to marry him!

The couple announced their proposal through an exclusive interview with The Sun. Dog popped the question in a candlelit room at his home in Colorado.

Francie told The Sun the proposal was completely unexpected:

“…I came in and he said, ‘I know that God brought you into my life and I don’t want to spend one moment of it without you.'” She went on to explain how Dog asked for her hand in marriage, saying, “And he got down on one knee and he opened the ring box and he said, ‘Will you marry me and spend the rest of our lives together.”

“Who can say no to that? It was wonderful,” Francie said.

Dog also presented a stunning engagement ring to his sweetheart. The couple shared some photos of the ring with The Sun, which you can see here.

Now that they’re engaged, Dog and Francie have a wedding to plan. They are waiting to get married until after everything eases up in the world, that way they can throw a huge bash with their family, friends, and fans.

Speaking to The Sun, Dog said it will be the “biggest wedding there’s ever been” and wants the ceremony to be open to all of his fans.

We’re sure many fans will turn out to honor Dog and Francie’s union whenever that day comes. In the meantime, we have their engagement to celebrate!

Congratulations to Dog and Francie. We wish them lots of love and happiness.