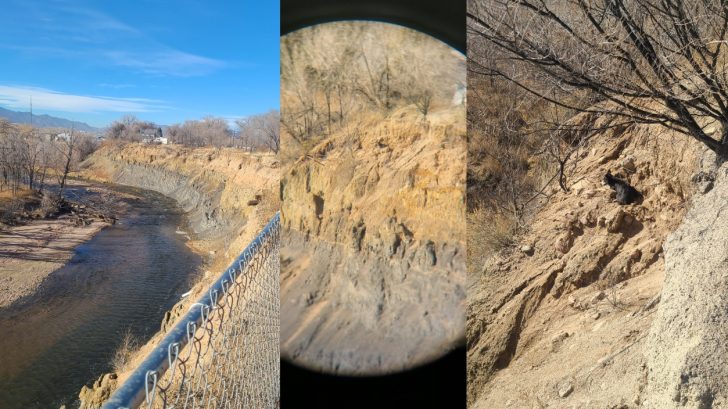 The Humane Society of the Pikes Peak Region is the largest animal shelter in southern Colorado and on Monday, they released a statement on rescuing a dog that had gotten stuck on the side of a cliff.

Animal Law Enforcement (ALE) said they received a call from someone who spotted the animal that was overlooking Fountain Creek.

Officers Barker and Johnson were the first to arrive on the scene used their binoculars to zoom in on the helpless pup stuck 150 feet above the creek below.

The officers were able to find a spot above the cliff where the dog was stuck at and a man who lived nearby offered to let them use his mountaineering harness and rappelling rope to get to the dog.

Officer Barker found a sturdy wooden fencepost to anchor herself to and soon began rappelling down to the dog. When the dog saw she was coming towards her, she started getting excited, wagging her tail.

She was able to get down there but was still a little too far away to reach the dog. At this point, Officer Johnson lowered down a catchpole that Officer Barker used to put around the dog’s neck and shoulder and she was able to pull the dog to her without the risk of losing her if she fell.

“Once the pup was finally in the arms of Officer Barker, Officer Johnson lowered a secondary rope which was securely tied into a makeshift harness for the dog. Officer Johnson quickly pulled up the dog and Officer Barker shortly after. Once both Officer Barker and the dog were off the cliff, they found out the dog’s name was “Jessie Lee” from her microchip and name tag,” Humane Society of the Pikes Peak Region wrote on Facebook.

The humane society was able to find her owner’s contact information on the microchip and called the owners. When they picked up the phone, the owners were already asking if the officers had seen their dog. The officers were glad to let them know that she was safe and the owners could come pick her up the following morning.

“Jessie Lee was missing for two weeks, and her owners were looking for her every day. When we told them she was ready to come home, they were there first thing the next morning to pick up their Jessie Lee,” the humane society wrote. “Thank you, Officers Barker and Johnson, for your heroism and for helping Jessie Lee get back to her home safely!”