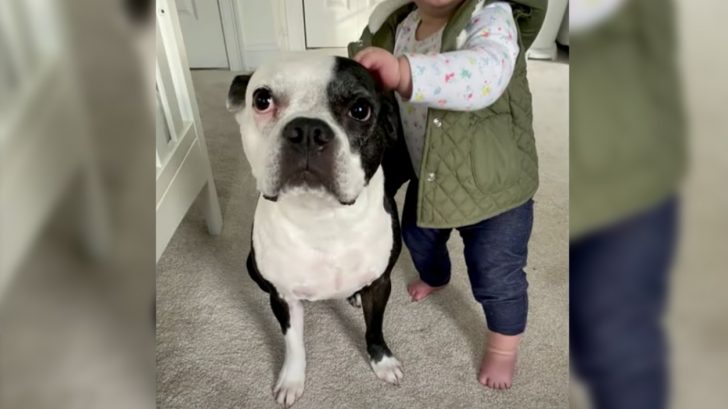 A Boston Terrier named Henry made the nationwide news after alerting his owner that her child was in danger which lead to the saving of the baby’s life.

Kelly Dowling from Glastonbury, Connecticut said that the incident took place on Monday night. She noticed that her baby was a bit sick from a cold and placed her down in her crib to let her rest.

It wasn’t long after that the dog kept letting itself into the nursery and being unusually fixated on the baby. Kelly told news reporters that she instructed Henry several times to get out of the room, but he wouldn’t listen and persistently made his way back.

“This time, he woke her up and when she started crying, I knew there was something wrong with the way she was crying. She didn’t sound right. So I took her downstairs and she was struggling to get air,” Kelly told WTNH. “The fact that he was so persistent and he didn’t go hide or stop when I told him to stop, he had to have known or maybe smelled something or heard something.”

Kelly quickly rushed her baby to Connecticut Children’s Medical Center where doctors ended up having to suck out all the congestion that was blocking her breathing.

Fortunately, with Henry’s warnings and Kelly’s quick decision to get her to the hospital, the baby is expected to be just fine. According to the news station, Henry was rewarded by getting all of his Christmas treats a little early this year.

Video Interview With The Mother Below