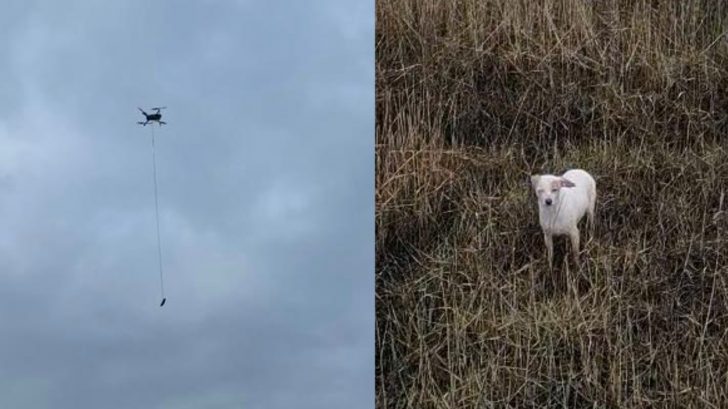 The Denmead Drone Search and Rescue team out in Hampshire, England came to the rescue on January 13th after a 3-year-old Jack Russell-whippet mix named Millie got lost and they used a sausage tied to a drone to save her.

Photos and videos of the rescue mission were shared on the nonprofit pet rescue group’s Facebook page, along with several detailed reports on the incident.

Chris Taylor, the chair of the Denmead Drone Search and Rescue team said the dog had apparently slipped out of her leash, which lead to the group on a four-day rescue attempt to try to find her.

She was eventually spotted on a mudflat but unfortunately, a rapidly rising tide near Emsworth on the U.K.’s south coast was coming, plus the ground was too unstable for the group to walk out and get her.

They knew if they didn’t think of a way to rescue her quickly, she would risk drowning. So the group coordinated police, firefighters, and local residents on the beach on what to do.

Finally, one of Denmead’s drone pilots, Dave Pike, came up with a creative solution – to attach a sausage to the drone in order to lure Millie to safety.

“It was a crazy idea,” Chris told The Guardian. “One of the local residents on the beach where we were flying from supplied us with the sausages – I think they were from Aldi. The woman cooked them up for us and we attached them with string.”

Fortunately, Millie took the bait and was lured into a safer place where the team could successfully access and retrieve her.

“Millie was extremely brave,” Chris said. She also seemed very happy to see humans again. “Millie was on her back licking [her owner] all over.”

She was taken to the animal clinic to be checked out and according to the vet, she “is completely fine.” Lots of tender love and care was the “only thing prescribed.”