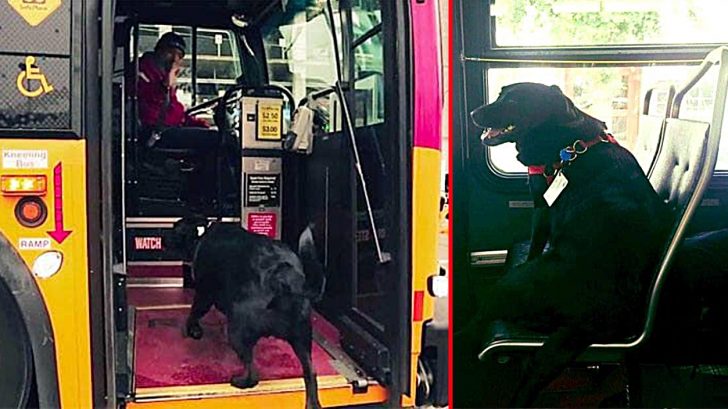 A black Labrador and Mastiff mixed dog became a local celebrity after being spotted riding the bus to the dog park all on her own a few times a week. The dog is named Eclipse and owned by a man named Jeff Young who shared his story about how it all got started and why it continues to happen.

Jeff said one day he was waiting with Eclipse at the bus stop smoking a cigarette and talking with some friends when the bus came pulling up to its normal stop. Eclipse walked without a leash and normally stood by his side but this time Jeff was apparently talking too long and Eclipse didn’t want to wait, so she got onto the bus.

Not realizing at first what just happened, Jeff looked around and didn’t see her anywhere. Panicked and stressing out, the only thing he could think of is she might have gotten on the bus and then would possibly get off at the dog park as they did together so many times. Jeff says he’s taken Eclipse to the dog park a million times and it was only 5 or 6 stops down the road so he hopped on the next bus and rode down to the dog park.

This is Eclipse. Every day she leaves her house, by herself, and takes the bus downtown to the dog park where she spends…

Fortunately, he was right. When he arrived at the dog park she was there smiling, running and playing with the other dogs. The bus driver later said he recognized her and dropped her off at the dog park. That was the moment he realized she could do it all on her own. Ever since then, two or three times a week he lets her go on her own and she always comes back.

Eclipse carries her own bus pass and information attached to her collar and always gets on and off at the right stops. She usually goes for a couple of hours all by herself and when she’s done playing she runs back to the bus stop and waits.

This is Eclipse. Every day she leaves her house, by herself, and takes the bus downtown to the dog park where she spends…

The bus drivers know her very well and gladly let her on board. They say they don’t mind her coming on her own because she’s very friendly and makes everyone smile. Regular riders often get on her bus and see her and go sit beside her and she puts her head on their laps.

She’s been doing it for years now and has been requested to star in commercials and documentaries. On February 20th, 2018, CGTN American shared a video on YouTube interviewing Jeff and Eclipse explaining their story in detail, you can watch it below.