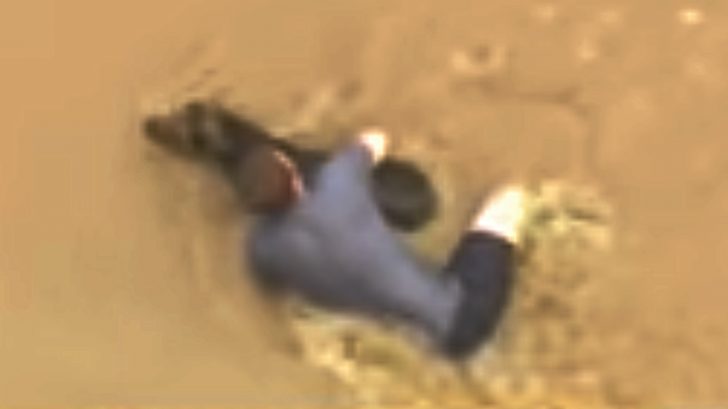 The Los Angeles Fire Department were finally able to rescue a German shepherd mix named Scooby after he became stuck for nearly two hours in the strong current of the Los Angeles River.

The incident took place on Monday afternoon after a storm brought heavy rain to the city. The fire department said they responded to a call shortly after 2 p.m. to bring a crew to the Burbank Boulevard and Woodley Avenue area of Sherman Oaks.

The dog’s owner told them that she got caught in the current with her dog. When the crew threw a rescue floating ring to the woman, she refused it in order to hold onto her beloved pet.

According to the Los Angeles Fire Department, they used a rope system hooked to a helicopter to lower a firefighter down and was able to successfully rescue the woman.

However, when firefighters tried to rescue Scooby, he fought them off, broke loose, and continued to float down the river.

Authorities said the river was moving between five to 10 mph, depending on the spot of the river, and a 28-year-old good Samaritan even tried to help by jumping into the river to rescue the pup.

He was able to grab ahold of Scooby, who bit him trying to keep himself afloat.

Firefighters lowered a rope to the man who was able to grab ahold, however, the dog got loose and continued to float on down the river.

LAFD later released a statement that said, “Please do not enter the water to attempt to get the dog. Bystanders doing so put themselves at risk and create yet another human rescue.”

#LAFD is STRONGLY asking ALL bystanders to stay OUT of the #lariver as we continue our efforts both from the ground and the air to rescue the dog. By going in the water you are created another human rescue which puts all at risk…including yourself. Please. Stay. Out.

After the dog was in the water for almost two hours, firefighters were finally able to capture Scooby and he was reunited with his owner.

The good Samaritan was taken to the hospital to be treated for his injuries.

Watch Footage Of The Rescue Below