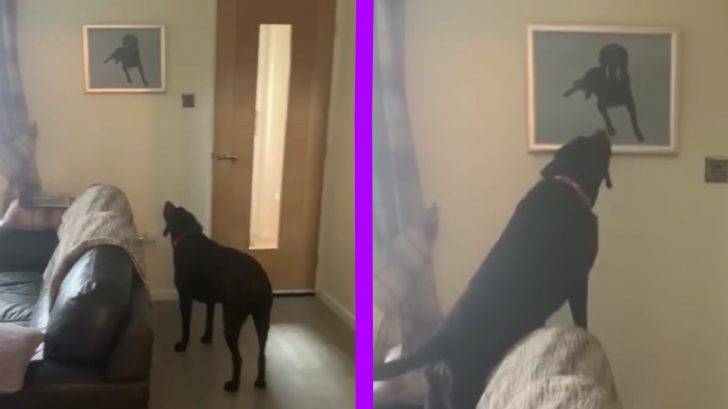 Libby Davey from Bristol, United Kingdom was the owner of two beautiful black labrador brothers named Smiff and Frank, until unfortunately, Smiff passed away in October.

Frank, Libby, and the rest of the family have been going through the grieving process ever since, and to help them get through it, Libby decided to hire a local Bristol painter named Tina Muir to paint her a picture of Smiff.

After painting the picture, she brought it over to Libby’s house to show her the finished product. Libby loved it and decided to hang it on the wall next to the front door in the living room. It was interesting how quickly Frank took notice.

It was truly amazing to see how he recognized his brother in the artwork. The moment Frank laid eyes on it he couldn’t stop staring at it. He grunted, barked, and wagged his tail. The picture was hung high on the wall, so Frank even decided to jump on the couch to get a closer look at it and to give it a good smell.

“I done a painting for a lady who’s dog recently died. This is his brother, how amazing & sad,” Tina Muir wrote on Facebook.

After closely inspecting the painting, he tried to figure out a way to get to his brother by looking out the living room window that was beside where the picture was. It’s quite touching. Frank and his love for Smiff will now forever live on and be immortalized in this video.

View The Video Below Of Frank Reacting To The Painting