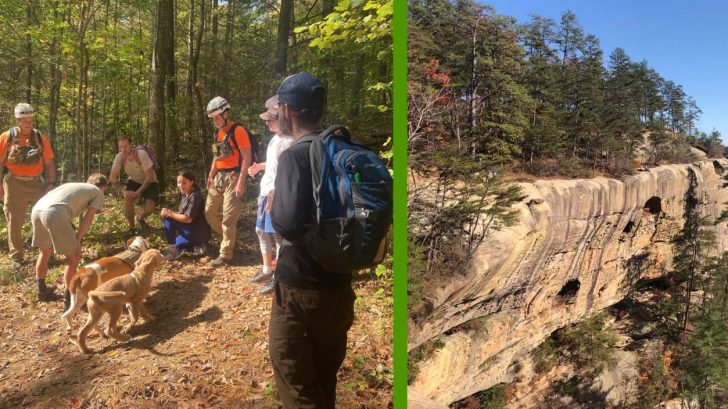 According to Wolfe County Search & Rescue Team, at approximately 1:00pm a hiker’s dog accidentally fell off the 170ft cliff of Frog’s Head in the Red River Gorge, Kentucky.

The frantic owner of the dog called 911 and said that their pup had spotted a lizard and began chasing it over the cliff’s edge.

“A hasty team was dispatched to the Bison Way Trail Head and made their way towards the base of the Frog’s Head cliff-line,” Wolfe County Search & Rescue Team wrote on Facebook.

As the rescue team searched the bottom of the cliff for the dog near the Indian Staircase cutoff, they ran into a group of hikers who said they had seen the dog roaming around the area.

The hikers had taken a picture of the K-9 and showed it to the team proving it was alive and well, just lost for the moment.

“When the hasty team made contact with the dog owner and showed them the photo, to our absolute amazement, this was their fur baby, Tyson (a Pitbull mix),” Wolfe County Search & Rescue Team said.

The team then decided to split into groups to try and find Tyson and doing so, within a short amount of time, they were able to find him.

“How Tyson survived 170′ fall is nothing short of miraculous and he was basically unhurt. This has certainly been a week of miracles in the Red River Gorge.”