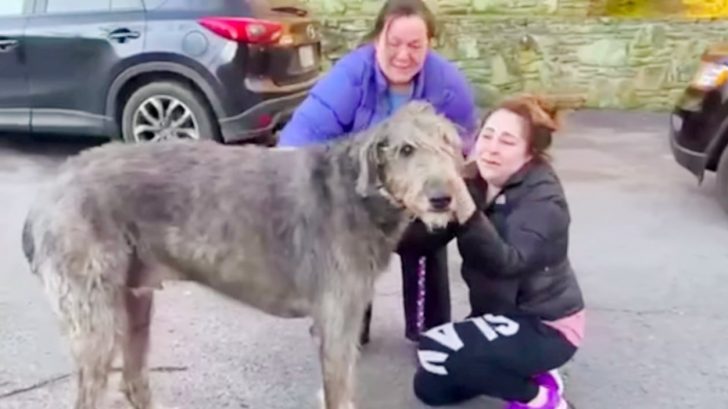 On Saturday (January 30), Meredith McKay Luckett’s parents were stopped at a intersection in Nashville, Tennessee when their Ford Expedition was struck by a minivan. Meredith told FOX 17 News the impact blew out the back windows of her parents’ vehicle.

This resulted in the Luckett’s dog, Fergus, being thrown from their vehicle. The 200-pound Irish Wolfhound was lost following the crash, and the family was desperate to find him.

Meredith and her family at least knew that Fergus was alive. She told FOX 17 News he was seen limping toward a nearby Baptist Church not long after the crash. But he remained missing for several days, though he was spotted a few times on Saturday and Sunday (January 31).

Over 2,000 people joined a Facebook group called “Find Fergus” to help the Lucketts locate their beloved pet. Finally, the family was reunited with Fergus on Wednesday morning (February 3).

FOX 17 News shared a video of the reunion on its official Facebook page. The emotional clip shows Fergus wagging his tail as he nuzzles Meredith and another family member.

Meredith shared the happy news of Fergus’ return on the “Find Fergus” Facebook group. She said he was found “about half a mile southwest from the site of the accident.” A nearby homeowner called his name and got him to come inside.

After Fergus reunited with the Lucketts, they took him to the vet for treatment. Thankfully, Fergus was not seriously injured in the crash and seems to be doing fine:

“…fortunately most of his injuries appear to be superficial – lots of cuts ands bruises,” Meredith said, “but we’ll know for sure after a more extensive exam tomorrow. In the meantime, he’s at home resting comfortably and being treated like a king!”

As many of you already know, Fergus is HOME! We were contacted early this morning with word that Fergus had been found…

You can watch the touching video of Fergus’ reunion with his family below. We’re so happy he made it home safely!