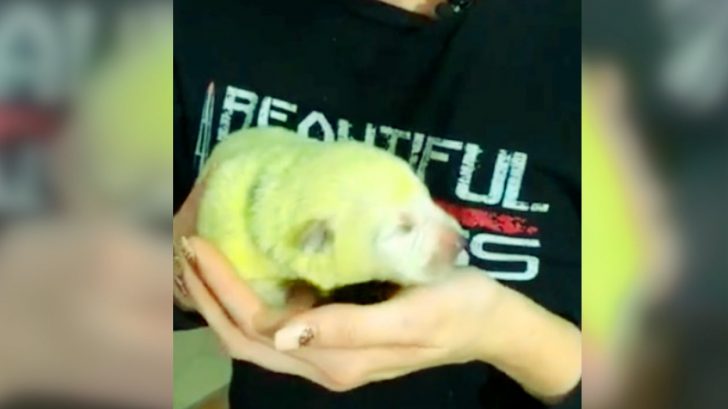 Even puppies born in the same litter can often be told apart thanks to unique coat colors and markings. But one puppy recently born in North Carolina stuck out like a sore thumb among his littermates.

Shena Stamey’s white German Shepherd gave birth to a healthy litter of eight pups a few days ago. Stamey said everything about the birth was normal, except for the fact that one of the male puppies was bright green!

She described the puppy’s coat as being “lime green” in color at birth.

But the puppy won’t stay green forever. The coloring is merely a stain that takes hold on a puppy’s coat while it’s inside its mother.

A family's dog gave birth to a healthy litter of eight puppies, but she also delivered one very colorful surprise. https://t.co/m6soZGGMXf

Suzanne Cianciulli, a veterinarian technician at Junaluska Animal Hospital, told WLOS why Stamey’s puppy was born with a coat as bright as a neon light.

While puppies are in the womb, they pass their first stool, which is called “meconium.” Sometimes, the meconium can stain a puppy’s coat, especially if it is white or lighter in color.

“The sack that they’re in when they’re in their mom, there can be meconium in there and that tends to stain them,” Cianciulli said.

A dog gave birth to a lime green puppy, but the color will eventually fade. In the meantime, you can still call him Hulk. https://t.co/VdtvmJ4ZKu

So how long will it take for the green color to fade away? Stamey told WLOS the puppy will still be green for a few weeks before its coat fades to its normal color.

“Mom licks it away until I bathe it and then, I guess after a couple of weeks, it will finally like fade out,” Stamey said.

The family chose an appropriate name for the green pup…Hulk. “It was lime green. He was super mad. So, yeah, he became Hulk,” Stamey said. She said other name considerations included Pistachio and Gremlin.

But now that the green color is fading and the puppy is appearing more yellow, the family has also taken to calling him Pickachu.

No matter which name sticks, one thing is certain, this puppy is unlike any other you’ve ever seen before! Learn more about him and his unusual coat in the video below.