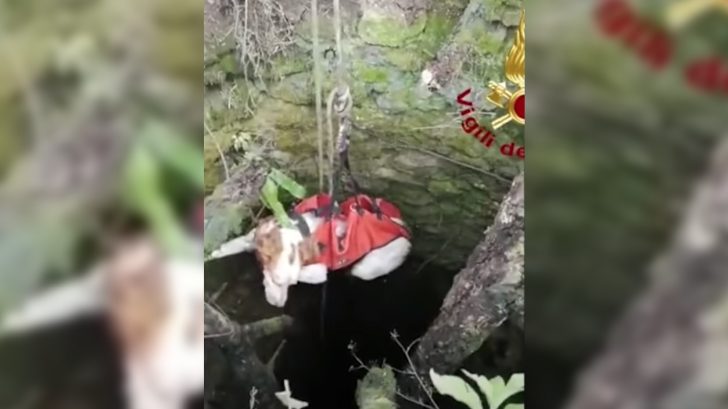 On November 7th, rescue workers filmed the relieving moment of a dog being pulled up out of a 20ft well after falling in there and getting stuck at the bottom.

The incident took place in the woods near the town of Guidonia, which is located in Lazio, Italy.

Vigili del Fuoco, a firefighter rescue team in Italy can be seen in the video lowering one of the firefighters down into the well after setting up a winch system at the top.

Safely and carefully, they lower him to the bottom of the well where he is met by one very excited dog who can’t seem to stop running around with joy and wagging her tail.

Fortunately, it appears the fall didn’t injure the animal, she just needed help getting out.

Once the firefighter touches the bottom, he takes his harness off and places it around the dog. He then straps her up securely and gives the signal to the team above that they can now pull her up.

The firefighter can be seen staying at the bottom of the well while the dog is hauled up out of there.

It’s unclear how long the dog was down there, but what is clear is that she was very excited to finally be out.

Once the firefighters got her safely to the top they then dropped the harness back down to the firefighter at the bottom so that he could be lifted out as well.

Officials said the dog appeared to be in good health and she was later reunited with her owners.

Go ahead now and watch the video footage of the incident below.