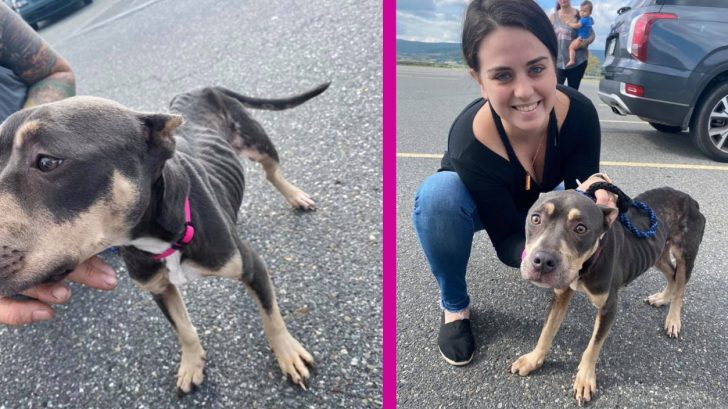 Jami Lassell from Carbon County, Pennsylvania said she received a call on October 8th from her sister-in-law who said she found a dog in an attic of an abandoned home while she was cleaning it out.

Jami told The Dodo,“I said, ‘I’ll be there in 10 minutes and will come and pick her up.’ And they’re like, ‘We’re just warning you, she’s completely skin and bones. I don’t know the last time she was fed anything.’”

Jami drove out to the location almost immediately after hearing the heartbreaking news. It was unclear how long the young pit bull named Remi had been locked away in the attic.

The attic was filthy and covered with fleas and feces. Jami said she figured the dog would be scared and skittish but she was shocked at the warm greeting she received from the abandoned pup.

“She is the most loving dog I’ve ever met,” Jami said. “As soon as she saw me, her tail started going — she just wanted love.”

Jami took Remi home with the plan to feed and take care of her until she could get her adopted out to a good owner. However, as soon as Remi stepped foot into Jami’s house, the plans began to change.

“She came home with me, and I was like, ‘I can’t give her up,’” Jami said. “She’s just a lovebug. Any time she sees someone, her tail goes and her ears perk up.”

After giving her a good bath, doctoring her up with flea medicine, and giving her a few warm meals to eat, she realized one of Remi’s legs was broken and may need surgery.

She added that even though the dog has endured so much pain and stress, she was still being very loving, even to Jami’s four younger children.

“She’s even better with kids than she is with other animals,” Remi said. “We have four kids in the house, and she’ll let them pull on her, pet her. Whatever a kid does, she’ll just let them do it.”

Jami says they also have a 9-month-old pittie with whom Remi has formed a strong bond over the few short weeks she’s been staying with them.

“They get along great,” Jami said. “They’re best friends and they do everything together. We go on walks all the time, they sleep together at night and sleep in bed with me.”

Now that the dog has been brought back to health and grown such a strong bond with the family, Jami says she has decided to keep her. She said the new addition to the family was very unexpected, however, she’s very grateful to have her in her life now.

“Things are very hectic, but the house just seems like it’s complete now,” Lassell said. “We have two cats and two dogs, and she just completed it all. She’s my little babe.”

Check Out The Dog’s Transformation Below