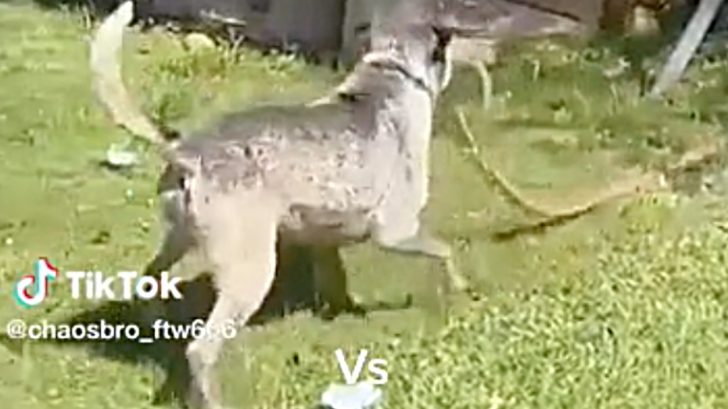 A cattle dog was filmed in Queensland, Australia bravely doing her job of keeping the backyard safe after a highly venomous eastern brown snake wandered into the property.

The dog was brought up and raised to protect her owner, the cattle, and the property from all forms of danger and when she spotted a snake from under a wooden garden shed, she went after it.

The video showed the dog grabbing the snake by the tail and carefully walking in reverse as she pulled it away from the shed and out into the open grass so that she could properly take a look at it and assess the threat.

Pulling it out into the open instead of trying to fight it under the shed gave her an advantage as she could now properly maneuver around the dangerous animal that is responsible for the highest number of snakebite fatalities in Australia.

After getting it into the open grass, she slowly walked towards it sniffing and the snake responded with a fast strike towards the dog’s face, however, the cattle dog was quick to move and get out of the way of its short but deadly fangs.

The snake then tried to slither away but the dog then lunged at the reptile, biting it on the center of its back and giving it a good shake before tossing it to the ground.

The snake was clearly hurting from the bite and the dog tried to go back in for another bite but this time the snake struck back and stopped the dog from getting close.

The snake struck out again another time and then tried to slither away but the dog quickly jumped back on the snake biting it on its back again and giving it another hardcore shake.

The snake was really hurt this time and gave up the fight while the dog continued to bite its limp body making sure the snake was down for good.

The owner of the dog posted the video on his TikTok page where several people chimed in on what they thought about Ruby, the blue dog’s actions.

“Watching this makes me miss my father in law’s dog. Saved his life many times up the paddock,” another said.

“This is how I lost my cattle dog,” one wrote.

Watch The TikTok Video Below Of Dog VS Snake