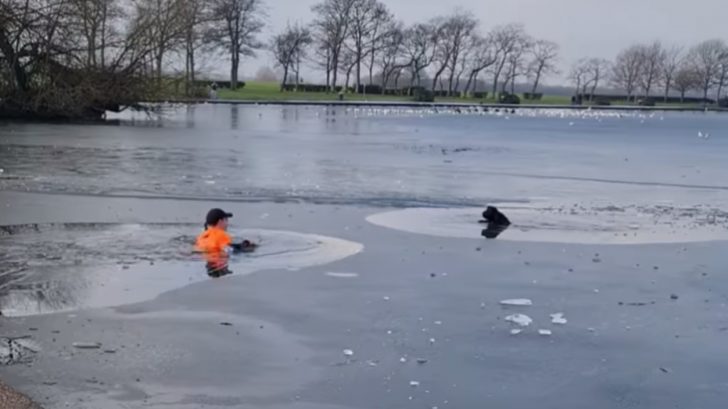 Darcy Pell from Yorkshire, England was jogging around the lake at Pontefract Park on a cold January afternoon when he noticed someone’s dog playing on the lake’s ice.

“I saw the dog running around the ice and I thought that dog’s going to fall in eventually — then it did!” Darcy told People. “I carried on my run for a couple of minutes but kept watching the dog, then just sort of decided that it wasn’t going to get out, so I ran back toward the lake.”

Darcy, along with a few bystanders, watched the dog paddle in place in the freezing water and do its best to hold onto the shifting ice around it. With things not looking so good for the pup, Darcy decided to jump into the lake and rescue the dog.

Darcy gets into the water and has to break the ice in front of him as he slowly makes his way toward the dog. It takes him a minute but he eventually breaks his way to the pup who seems very happy to see him. He grabs onto it and pushes the dog towards the shore.

“I don’t generally jump into ice water for fun, but I do triathlons and live in Yorkshire, so it’s never really very warm,” he added. “I’m a strong swimmer, so it didn’t really phase me. I just got in and used my body to break the ice because it was quite thick that day.”

Bystanders waited at the edge of the lake and helped both the dog and Darcy out of the water once they got close enough to grab them. The dog shook off the water and walked off with its owners and Darcy simply changed shirts and continued his jog.

Fortunately, all of this was captured on video. Take a look below.