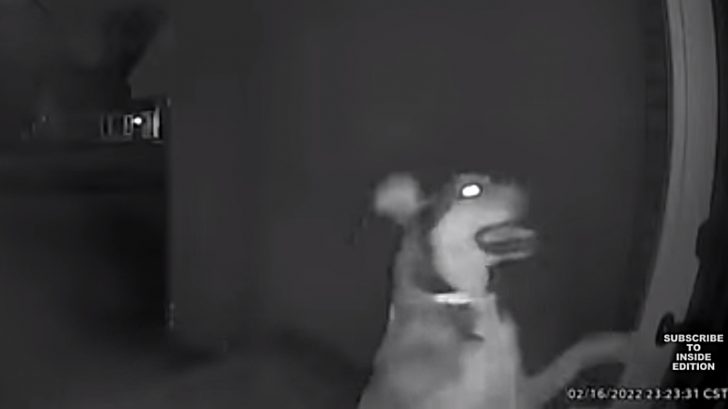 A pet owner from Lenexa, Kansas said he was very happy with his Ring doorbell security camera after his dog, Dexter, escaped doggy daycare and ran home to ring the doorbell.

The dog’s owner, Jeremy, said he and his wife were dodging an incoming blizzard hitting their city by flying out to Las Vegas for a week-long vacation when he got a notification from his phone saying someone was at his home’s front door.

When he checked the footage, it showed his best bud Dexter scratching at the front door and ringing the doorbell with his paws. The dog had only been at the daycare center for three days before he jumped a six-foot fence and made a b-line for the house.

“We adopted Dexter to be a watchdog for my wife while I traveled, and he takes that job VERY seriously, so that’s probably why he was so determined to come home,” Jeremy told Inside Edition.

The dog ran two miles from the daycare, all the way to Jeremy’s front door. You can hear Jeremy in the video calming his pet while he called the center and informed them that Dexter was on his front porch.

With Jeremy being over 1,000 miles away from home he was able to get the dog to stay there until an employee from the center pulled up in a car in front of the home and walked over to retrieve him.

Jeremy noted that he’s very grateful for the Ring doorbell security camera for notifying him because, with the blizzard coming, Dexter could have been left out in the freezing cold.

“Previously, it made me feel safe knowing that whenever anyone came to our doorstep, we would be notified of it. But now, I truly believe that the Ring Doorbell saved my dog’s life. Without it, he may have been stuck outside and wouldn’t have been able to find a warm spot to stay safe,” Jeremy told Inside Edition.

Video Interview With Pet Owner Below