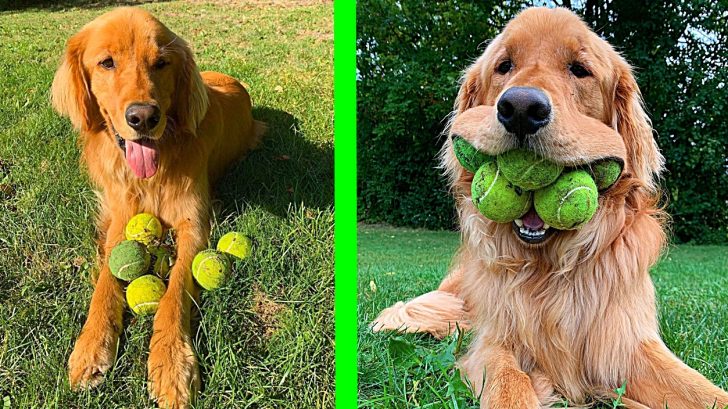 Finley Molloy, a 6-year-old golden retriever from Canandaigua, New York has officially been confirmed to be a Guinness World Record holder for holding six tennis balls in his mouth.

His owner, Erin Malloy, created an Instagram account for him back in 2018 to show off his cheerful demeanor and his obsession with tennis balls, but it wasn’t until she was reading through a Guinness World Record book one day that she realized five tennis balls was the record at the time.

Her boy Finley could do one better than that, though. So Erin did some research to learn about all the various requirements and things you have to submit to officially enter to win the world record and got to work.

She pulled out a camera every time Finley would go to put balls in his mouth until she finally got him on camera with six balls. She submitted all the evidence and the application process took more than a year finalize but eventually, Finley became the official world record holder.

“He got pretty excited when all of our neighbors were outside his front yard. Obviously, he’s staying humble, but I think he’s pretty pumped,” Erin told USA Today. “When I look at him I’m like, ‘I want to squeeze you, I love you so much!'”