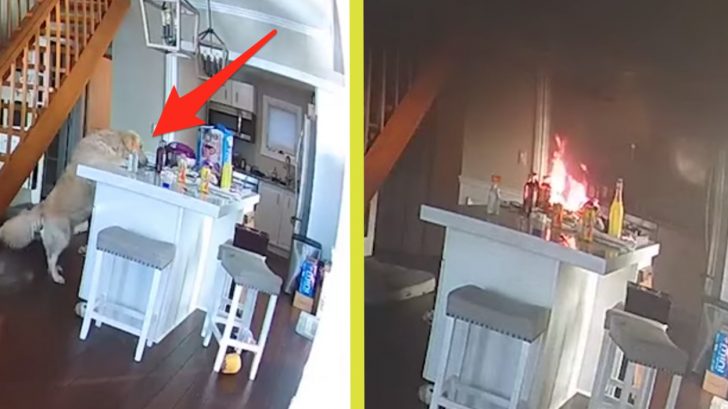 A golden retriever in Lake Orion, Michigan almost burned the house down after it accidentally turned on the stove. Why did the dog do that? It was trying to get to some food on the counter.

Richard Veyna, the owner of the dog Finn said he had just left his home to take his children to school when it all went down.

Footage from his ADT home security cameras showed the dog reaching up onto the counter to get some cotton candy that the Veyna family made the night before.

In a pure accident, his paw hit the button on the stove and turned it on. Unfortunately, there was a cardboard box sitting on top of the burner and within a matter of moments, the cardboard caught on fire.

By this time, Finn was laying down on the floor taking a nap and the fire alarm went off due to the smoke.

Finn jumped up from his nap turning his head sideways as the alarm continued to make noise. Smoke quickly filled the house and triggered the security system to alert the ADT monitoring center to call the local fire department.

Firefighters quickly arrived on the scene, put out the fire, and got all of the pets out of the house until Richard got home.

“The ADT dispatcher who handled the fire alert is meeting the Veyna family and pets Thursday. ADT will also make a $5,000 contribution to the Lake Orion Fire Department and provide pet alert window stickers,” FOX reported.

Watch The Incident In The Video Below