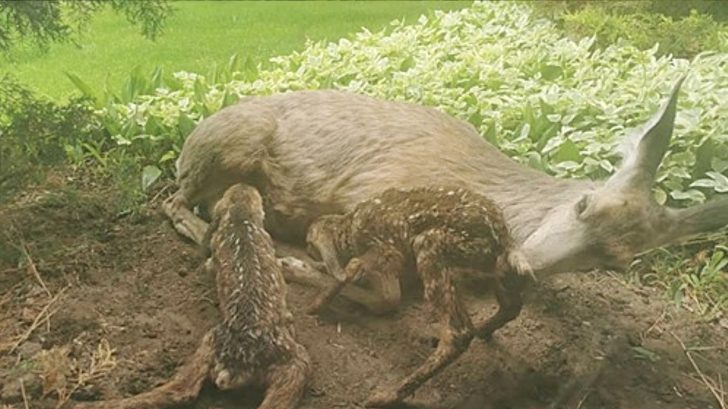 Braylon Gorham and his wife Meaghan Lautischer woke up on a beautiful Sunday morning in Lethbridge, Canada to see a mother deer giving birth to two fawns right outside their living room window.

Braylon noticed the deer first and called his wife into the living room to take a look. They both watched in amazement as the mother deer cleaned off one of the fawns she had already given birth to in their flower bed. The couple said they didn’t want to interrupt the mother so they just hid in the living room and did their best to film it. Not long after cleaning the first fawn, she popped out another one.

After both fawns were cleaned off, their natural instincts kicked in and all three laid completely still for the entire day. Braylon and Meaghan said they occasionally checked on them to make sure they were still doing good. Once it became dark outside, they finally started moving again and ended up taking off into the night.

“In the city, there’s no predators per se, but they have their own confusing aspects and whatnot, so it’s interesting to think of it with that perspective and how they’ve kind of adapted,” added Gorham.