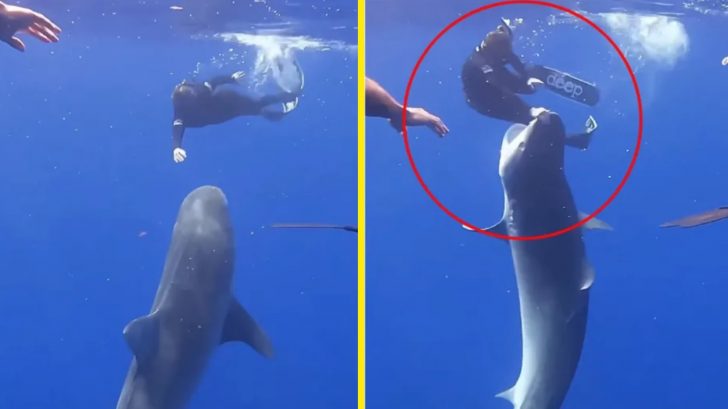 Marine biologist Andriana Fragola is nothing more than a modern-day mermaid and badass at swimming in the seas and the proof was shared to her TikTok and Instagram page.

“This video is a great example of how every shark approach is never the same. Here one of my favorite tiger sharks who we lovingly call Kalihi is racing up to me (the video was slowed down so you can actually see what is happening but her vertical approach is very fast),” she wrote on YouTube about the video.

Andriana is a highly experienced shark safety diver who teaches people about the proper ways to act in the water while swimming with some of nature’s most fear preditors.

The footage showed Andriana in the deep waters off Hawaii swimming with a group of people when the massive shark comes swimming directly up from below her and opens up its mouth as if it was potentially trying to eat her.

“She is one of the spiciest and most unpredictable sharks I have ever worked with, and she loves to approach in ways that are different than the rest. As she is coming up to me you can see how I dive down to meet her to have more leverage over her head and her jaw. Because I have seen her approach like this often, I already have the idea in my head that she is probably going to snap her mouth open,” Andriana said.

The well-eduicated diver, in a very composed manner, grabbed the shark on the tip of the nose and pushed it away.

“At this point the reposition of how to control the situation and safely deter her away from me changes drastically. I am able to get above and below her jaw to close her mouth and then guide her in a direction away from me. Sharks are not monsters, but they certainly are apex predators that deserve respect. No one should be trying to dive with large sharks without training or without a professional guide,” she said.

She took her hand and then pushed on the lower jaw of the animal to shut its mouth and, just like magic, it closed its jaws and continued on swimming. The mesmerizing footage was shared on social media and quickly went viral receiving thousands of views.

“These animals are powerful and even if you think you know what is going on they can be very unpredictable and change in a second. No one that puts out information on shark behavior or shark interactions is trying to say that this is something every one can or should do on their own,” she said.

Andriana went on to say that this information can help protect you in an unexpected situation, but by no means does that mean go jump in the water with 16-foot tiger sharks alone, with no experience.

“Sharks are not puppies, they are beautiful wild predators. This situation is a wonderful demonstration of how going with someone trained is critical to having a safe and enjoyable experience for both the people and the sharks. I love sharks, and I want all people to love them too, I just want to make sure they are still respected in the process,” Andriana said.

See Footage From The Fascinating Encounter Below