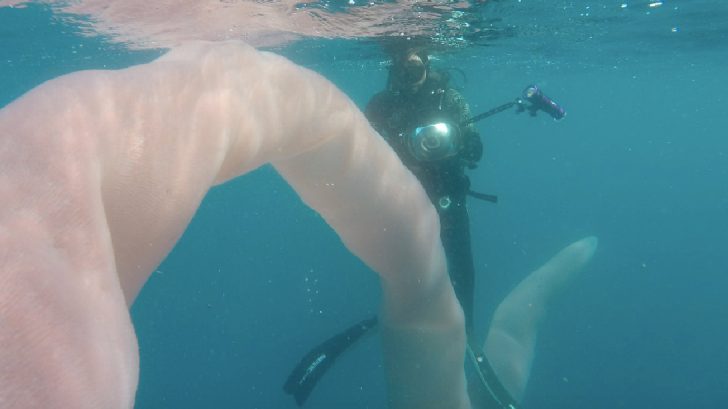 Divers off the New Zealand coast got quite a surprise when they found themselves face to face with a 26-foot-long sea worm.

Videographer Steve Hathaway was filming a tourism promo with the help of his friend Andrew Buttle when the pair encountered the creature. Buttle was the first to notice it and put on his scuba gear to get a closer look. Hathaway, who had been hoping to see a sea worm up close for years, joined his friend in the water and the pair spent an hour swimming around the creature and captured as much as they could in photos and videos.


The sea worms have also been called cockroaches of the sea due to their ability to “pull food from even the most inhospitable environments.” The creature is known to experts as a pyrosome and are part of a family of sea critters known as “sea squirts.”

Pyrosomes are made up of hundreds and sometimes thousands of individual organisms called zooids, something witnessed by Buttle who told National Geographic that thousands of tiny creatures could be seen along the giant sea worm’s body.

Andrew Jeffs, a marine science professor at the University of Auckland, said that the pyrosome is an important tropical food source as other creatures like turtles and spiny lobsters can feed off of the tiny tubes for weeks at a time.

Sightings of sea worms are rare as they only come to the water surface at night where they feed on whatever can be found in the water. With gelatinous bodies similar to that of jellyfish, the sea worms are known to glow due to natural bioluminescence, or emission of light.

See a video of Steve Hathaway and Andrew Buttle swimming with their massive find in the clip below.