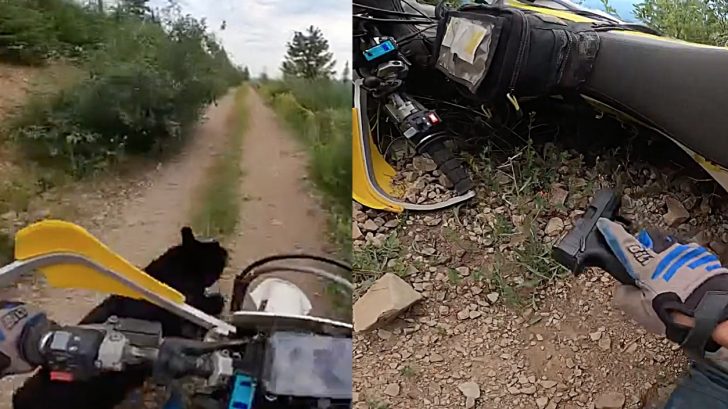 Logan Slone was alone riding his dirt bike through a trail in the Idaho wilderness when he accidentally crashed into a young bear that was running across his biking trail.

The entire encounter was captured on his GoPro camera that was attached to his chest. The video showed him moving down the trail at a fairly fast speed when from out of the corner of the left screen, you can see the small bear running as fast as it could making its way towards the trail.

Everything happened so fast that Logan didn’t really have time to slow down and prevent colliding with the animal. Instead, his front tire ends up hitting the bear knocking him off his bike to the ground with the bike landing on his left leg, pinning him.

Logan wrote on Facebook, “What started as a simple evening ride to search for my jacket from the previous day turned into quite a story after an adolescent black bear ran into the trail, smashing right into my front tire, washing out my bike and throwing me over the handlebars.”

Being alone, his leg pinned, and knowing since he saw a baby bear its mother might be in the area angry and ready to attack him to defend her cub, Logan didn’t even try to unpin his leg at first, instead, he grabbed his gun on his arsenal vest to protect himself in case she was there ready to come after him.

“Due to the small size of the bear, I immediately became concerned that I would be facing an angry momma bear charging at me while my left leg was pinned under the bike. Situational awareness and being prepared are key components of traveling out into the wilderness by yourself. Grateful that neither myself nor the bear were injured in this encounter, and stoked that I actually had my #gopro on for once,” Logan wrote.