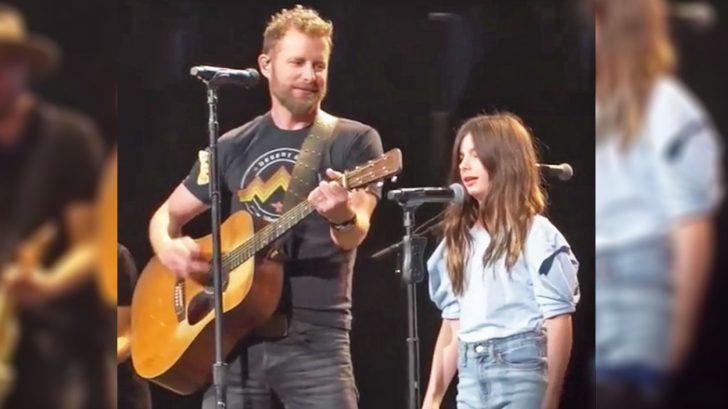 The dynamic duo is back at it again! Dierks Bentley and his daughter, Evie stunned the audience for yet another incredible duet. Standing side-by-side, this daddy-daughter duo never ceases to amaze us.

Dierks has been bringing his oldest daughter, Evie into the spotlight for years. Once discovering her passion for singing, she started making frequent appearances at his shows. One of her first daddy-daughter duets was back in 2012 when Dierks invited three-year-old Evie on stage for his song, “Thinking of You.” Timid but smiley, she stole the audience’s hearts.

More recently, while on his 2018 Mountain High Tour, Evie joined Dierks for a heart-stopping duet of “My Religion.” Hilariously enough – Dierks caught her singing the age “inappropriate” lyrics during the performance and couldn’t help his dad instincts from coming out. Nonetheless, it was clear her real vocals were coming in quickly.

As she follows in her father’s footsteps, she gave his latest audience quite the show after taking the stage at this Burning Man Tour. Performing in her hometown of Nashville, at the Brookstone Arena, this couldn’t have been a more exciting moment for Evie!

Looking super grown up, she was ready to impress the crowd by singing Brandi Carlile’s part in “Travelin’ Light.” Her confidence lit up the stage as she soared through the verses.

Following her solo, Dierks took the next verse. Unexpectedly, Evie began to “floss” while her dad sang the heavenly lyrics. One thing is for sure – these two know how to have fun together!

We can’t wait to see what duet Evie features on next!

Check out Dierks and Evie’s “Travelin’ Light” duet below!