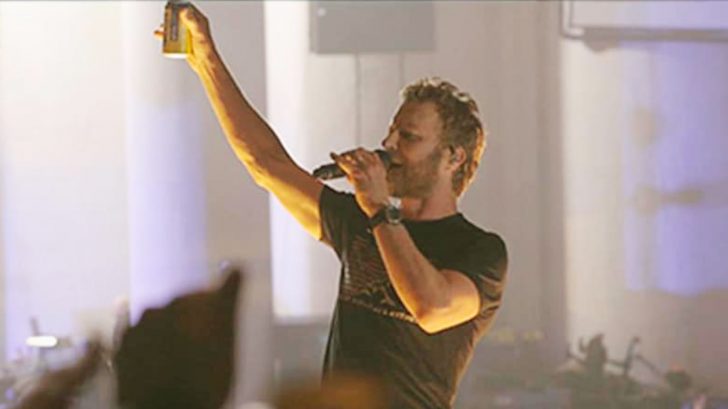 To help promote his upcoming – not to mention fast-approaching – Burning Man Tour, Dierks Bentley made a video that was a little out of the ordinary. The parody video promotes what Bentley called “The Burning Man Tour On Ice.”

He was dressed in a frilly figure skating outfit and was joined by his tourmates Jon Pardi and Tenille Townes for the comical figure skating routine. Some of the tricks you could tell were performed by pros, but the three singers did a lot of their own skating!

While Pardi wore hockey skates, Bentley wore figure skates in some scenes, which have a couple major differences than hockey skates, including the toe pick.

This was a funny and important part of the 1992 movie The Cutting Edge, where a former hockey player becomes a figure skater and falls down a lot because he is not used to the toe pick. Every time he does fall, his female skating partner says, with attitude, “Toe pick!”

A few days after releasing the full video, Bentley posted some behind the scenes footage of him falling down – and hard – on the ice during one of the takes.

Some people weren’t sure if he did it on purpose or not, while others said, “toe pick!” quoting The Cutting Edge.

“4 weeks later and still feeling this… I’ll be sticking to full pads from now on!” he captioned the video. Bentley, who plays in a recreational hockey league, isn’t used to the toe pick – and it showed!

lost 7-1, but when your son comes over to your bench after his game ends…does not get any better ?#nhl #PossumHockeyClub

The fall looked very painful, and by how long he stayed down for, we know it felt as painful as it looked!

4 weeks later and still feeling this… I’ll be sticking to full pads from now on! Love how @jonpardipics comes over to help when he can barely stand up on his own. appreciate @fiddlindan concern in the background. @velvetsedge however reeeeeaaaaally seems to be enjoying herself…glad I could provide the entertainment. #ManDown #BurningManTour

Pardi, who does not do well on the ice, slowly skated to Bentley’s side to see if he was alright. Luckily, Bentley is laughing about the fall now!

The tour kicks off on January 18th in Ottawa, Canada and goes until March 30. Watch the full promo video below.