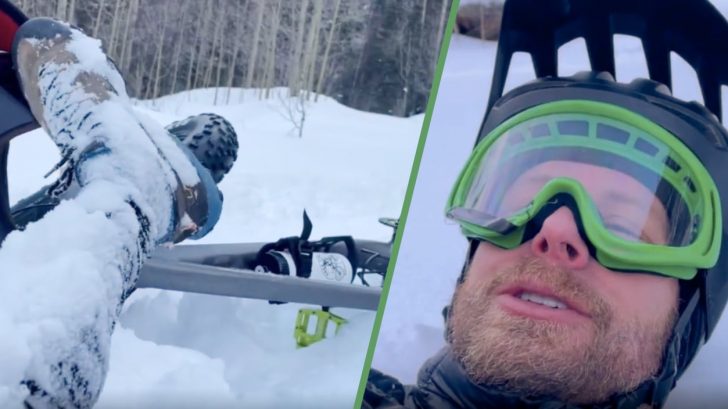 When Dierks Bentley isn’t on stage, you can likely find him on a bike. Even though he’s an experienced biker, he still experiences a few mishaps every now and then.

Bentley suffered a fall in 2019 while biking in Colorado. That fall resulted in him breaking his left hand.

Then in May 2021, Bentley crashed his bike while participating in a race in the desert. He said he went “over the handlebars” and ended up “busting” his hip. Still, he managed to finish the entire 100-mile race.

More recently, Bentley fell off his bike while riding down a hill in the snow on his fat bike. Bentley happened to be filming his ride, so he captured his fall on camera.

Bentley shared the video on social media, captioning it, “what I get for trying to film and fat bike…“

As he fell, Bentley exclaimed “Oh s—!” He seemed to be unharmed, and started laughing as he turned the camera around to face him.

“That’s what you get for trying to film and bike at the same time,” he said while laying in the snow. He switched the camera back around again to show his wrecked bike and his legs, which were covered in snow.

Finding some humor in the situation, Bentley joked it was “[A] good time just to take a little snooze.”

Head below to check out the video Bentley shared of his fall. Thank goodness he wasn’t hurt!