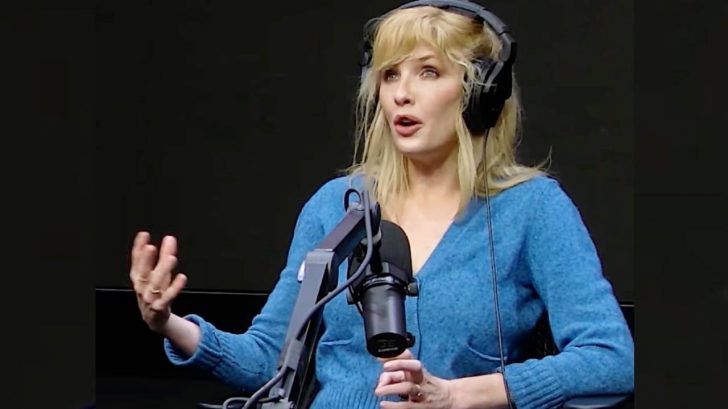 Beth Dutton. Two of the most feared words in the Yellowstone world. She is not afraid of anyone or anything, is fiercely loyal, and have some of the best one-liners. One of our favorites is, “You are the trailer park. I am the tornado,” which she told Roarke Morris during a Season 3 interaction.

For four seasons, we’ve watched her battle bad guys, survive an explosion, and threaten her fair share of people…all with the perfect American accent. But, it turns out, the actress who plays Beth Dutton, Kelly Reilly, is from Chessington, London, England.

If it weren’t for the behind-the-scenes videos and interviews, we would have never known about her natural English accent. In a new clip posted to the Yellowstone social media pages, Kelly Reilly and Cole Hauser (Rip Wheeler) were talking about their characters’ bond. The clip is from Episode 2 of the Yellowstone TV Official Podcast, hosted by Jefferson White, who plays Jimmy on the show.

Of his character’s relationship with Beth, Hauser said, “I always want Rip to allow her to feel like she wasn’t being, you know, shackled or pressured into anything. He had this great ability to allow her to live whatever life she wants. And i think when you have that. you to draw in the person that you  really love.”

Reilly added, “It’s unconditional love. It’s what we all want. and he does love her unconditionally. There is that one scene with Walker in Season One or Two, [Rip] says ‘I don’t care if you’ve been with him or not.’ There’s not ownership [over her], in a story that is all about ownership.”

When Yellowstone posted this clip on their Instagram page, so many people commented saying they had no clue she had an English accent! Someone wrote, “That accent is amazing!!” with another using five “mindblown” emojis.

I love their “real” voices!

“My mind is blown that she speaks with an accent in real life.???”

You can listen to the entire episode with Reilly and Hauser, as well as other episodes, here. Watch another interview, with Reilly showing off her English accent, below.