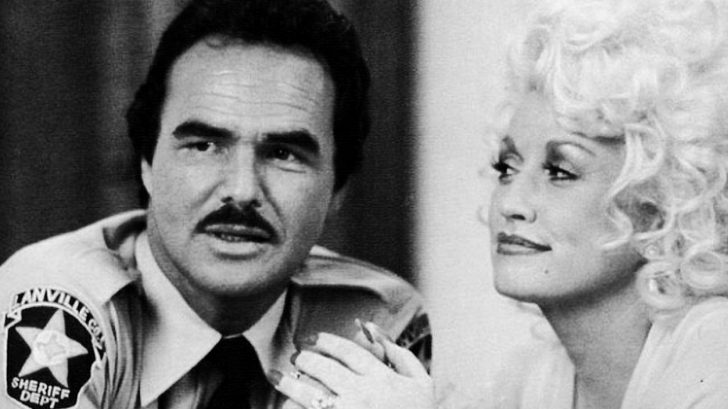 On Thursday (September 6), news broke that the legendary actor and sex symbol Burt Reynolds had passed away at the age of 82. His longtime manager, Erik Kritzer, confirmed the news with The Hollywood Reporter.

Known for roles in films such as Deliverance, Boogie Nights, Smokey and the Bandit, and The Best Little Whorehouse in Texas, Reynolds was one of the most sought-after actors of his era. As The Hollywood Reporter writes, he was the highest-grossing movie star from 1978-1982.

It was during that last year that The Best Little Whorehouse in Texas was released, in which Reynolds played Sheriff Ed Earl Dodd.

Country superstar Dolly Parton played Reynolds’ lover in the film, Miss Mona, who runs a brothel but is an otherwise law-abiding citizen. Viewers watch their forbidden and hidden relationship play out on screen, until the film finally comes to an end with the sheriff proposing to Miss Mona.

When news broke that Reynolds had passed away, Parton was surely one of the first people his fans thought of. It didn’t take long for her to make a statement, and what she had to say will surely bring tears to your eyes.

Sharing a photo from the set of The Best Little Whorehouse in Texas, Parton spoke affectionately about Reynolds as a costar and friend:

“I know we will always remember his funny laugh, that mischievous sparkle in his eyes, and his quirky sense of humor,” she wrote. “You will always be my favorite sheriff, rest in peace my little buddy and I will always love you, Dolly.”

Oh how sad I am today along with Burt‘s millions of fans around the world as we mourn one of our favorite leading men. I know we will always remember his funny laugh, that mischievous sparkle in his eyes, and his quirky sense of humor. You will always be my favorite sheriff, rest in peace my little buddy and I will always love you, Dolly

That last bit of course, refers to Parton’s iconic song “I Will Always Love You.” While the song was first released in 1974, Parton re-recorded it to include on The Best Little Whorehouse in Texas soundtrack.

In the film, Miss Mona sings the song to the sheriff after he proposes to her, thinking that it’s best for them to part ways. The scene in which Parton performs the song is arguably the most emotional in the entire film.

Remember Reynolds and his outstanding legacy by watching that scene below. He’ll be so dearly missed by all.