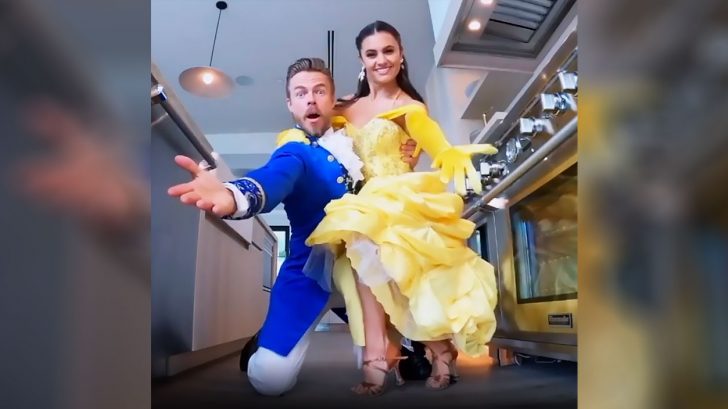 On Thursday night, ABC aired a one-hour musical special called The Disney Family Singalong, hosted by Ryan Seacrest and featuring a number of guests who performed various Disney classics from their homes. One highly notable performance was of Beauty and the Beast’s “Be Our Guest.” This Disney favorite was elaborately done by Derek Hough, and his girlfriend Hayley Erbert. Halfway through the video performance, Derek’s sister, Julianne Hough joined in and danced with them over video chat.

All three of them are professional dancers who are famous for competing on the popular television show, ABC’s Dancing With The Stars where Derek has won six seasons. The trio once again wowed audiences with their performance by pulling off impressive dance moves while dressed up as characters from Beauty And The Beast.

Even their two cats, Palo and Lily along with Romie their dog made it into the video.

Julianne, who is also a country music artist as well as a two-time champion on Dancing With The Stars, went all out swinging from a ladder in her kitchen just like Belle does in the movie.

The event also featured some other country artists such as Little Big Town, who sang “A Spoonful Of Sugar” and Thomas Rhett singing, “Do You Want To Build A Snowman.”

Watch the video below to see their incredible performance.

Get ready to see some familiar faces tomorrow night at 8|7c on ABC! ? @derekhough @hayley.erbert @juleshough