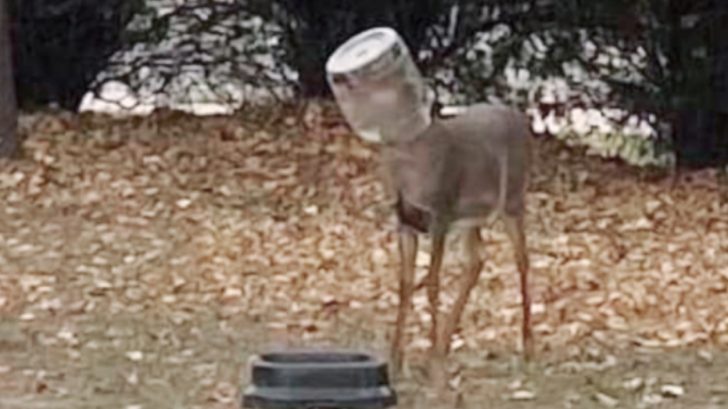 Residents of Wichita, Kansas gathered together with lassos and optimism on Tuesday afternoon to search the wooded areas of Pawnee Prairie Park to find a deer that had a plastic container stuck on its head.

“Monday we started getting calls to animal control about a deer in Pawnee Prairie Park with a bucket, what we think is a bucket on its head,” Megan Lovely with the City of Wichita told KAKE reporters.

The deer was spotted by multiple people who tried to catch or corner the animal so they could help remove the cumbersome burden but no one was ever able to get close enough.

“We saw this deer over there run, run right by with like a Cheez-It ball, um, container on its head,” resident Kamy Farris, who saw the deer on Friday said.

“I hope they find the deer. It’s something that no animals should go through. It’s a torture process,” another resident Jaden Inks who also saw the deer said.

Kansas Department of Wildlife and Parks even got involved with trying to find the deer but they were still unable to do so. Everyone was beginning to lose hope after many days of fearing the animal was going to dehydrate or starve.

“Tomorrow will be the fifth day. So she hasn’t been able to eat or drink. So we’ve been tracking her; we’ve come close several times to finding her. But we just haven’t been able to get close,” Jessica Nevil, a resident who was searching for the deer said.

KAKE News reported that after nearly five days, resident Jp Reed was finally able to get the plastic container off the deer’s head late on Tuesday night.

He received a few scrapes and bruises during the process of getting the container off but he said it was all worth it to finally get the deer out of its predicament.

Video Interviews With The Residents Below