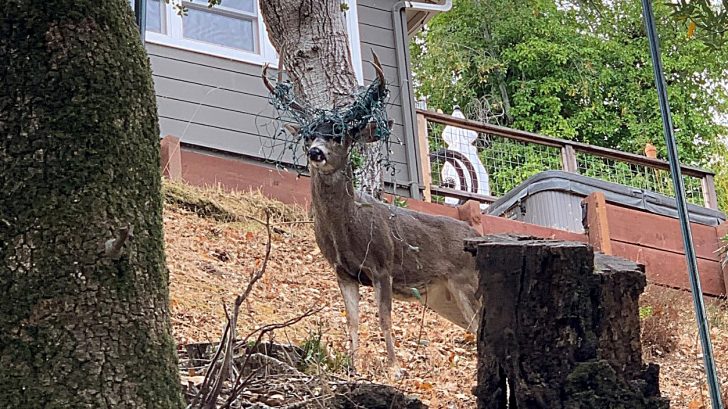 Christmas is right around the corner and people all around the United States are starting to get into the holiday spirit. Including a full-grown male buck that was spotted with a full string of decoration lights wrapped around his antlers.

Trying To Figure Out What To Do About It

The deer was photographed in Northern California after a local found it in their backyard. Fearing for the deer’s safety they called the police to see if there was any way of helping it. The officer who arrived at the scene observed the buck and said it appeared the lights were not stopping the deer from moving around or eating.

“The good news is that he’s going to be okay,” Lisa Bloch said, the director of communications for Marin Humane. “He’s totally mobile and able to graze. He’s just looking rather festive.”

And due to him being in a populated area, if they were to try and tranquilize the deer he could easily jump into traffic before he passed out which could potentially endanger his own life or the lives of people driving. So they decided to leave him alone and let nature takes its course.

Let Nature Take Its Course & Be Mindful Of Wildlife

In addition to that, the officer added that because winter is here he should be shedding his antlers soon. At that point, the lights would naturally fall off with the antlers. Officers also thought about using a control pole to capture him but didn’t want to risk being charged at and impaled by the deer.

Marin Humane said this incident “serves as a good reminder” for when hanging up Christmas lights this year to make sure they’re not in a place where wildlife can easily get to it. Like being draped over a bush, where these lights most likely came from.

“We’re lucky to share our space with so many animals in Marin County so let’s be mindful of their safety, even when we’re getting festive,” Marin Humane wrote on Facebook.