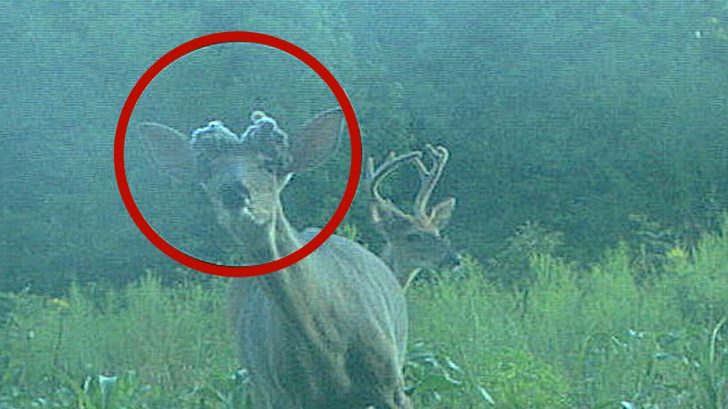 The Charlotte Observer recently wrote a report about a dear that was spotted on a trail camera and said that it appeared to be wearing a “bad wig,” however, it’s not actually a wig. It’s a male deer that has a deformity called antleroma. According to deer experts at the NC Wildlife Resources Commission, it’s a condition for when a deer’s antlers grow in an abnormal way.

If you look closely at this deer's antlers, you might notice they look a little odd, almost like a bunch of grape's…

“If you look closely at this deer’s antlers, you might notice they look a little odd, almost like a bunch of grape’s [sic] sitting on this buck’s head,” North Carolina’s Candid Critters wrote on Facebook.

When a deer has antleroma it causes their antlers to grow in freakish ways, with knots and twists and turns and can even be fatal for the deer if the antlers decided to grow in reverse, back towards the brain. This happens to a deer when it has insufficient androgen production according to a research article by Uwe Kierdorf, Karl V. Miller, Stefan Flohr, Santiago Gomez, and Horst Kierdorf. Take a look below to hear more about abnormal deer antlers.