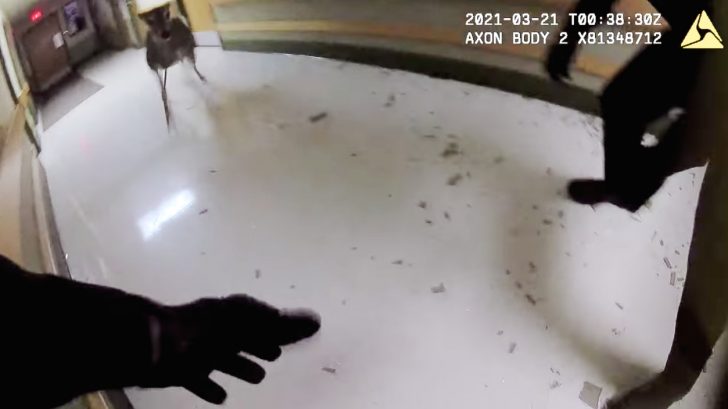 In March 2021, healthcare workers in a nursing facility located in Wausau, Wisconsin had to protect the elderly from a white-tailed deer that had accidentally crashed through a window into the home. According to officials, it got right up and started sprinting down the hallways.

Healthcare staff reached out to the Wausau Police Department who sent three police officers to urgently extract the deer before it got hurt or injured someone else in the home.

Three brave police officers looked for the deer with the guidance of the staff who were able to show them where it was located. Once it was found, two of the police officers grabbed and wrestled the deer down to the ground as it tried to sprint past them.

The deer slid on small pieces of glass from the broken window which helped the police officers to get ahold of the deer to control its movements.

A third police officer joined their efforts to stop the deer from moving and they carried it outside the nursing home and set it free. The deer ran off safely into the forest and the three offices left as heroes and protectors of the elderly.

Check Out Footage Of The Deer Removal Below