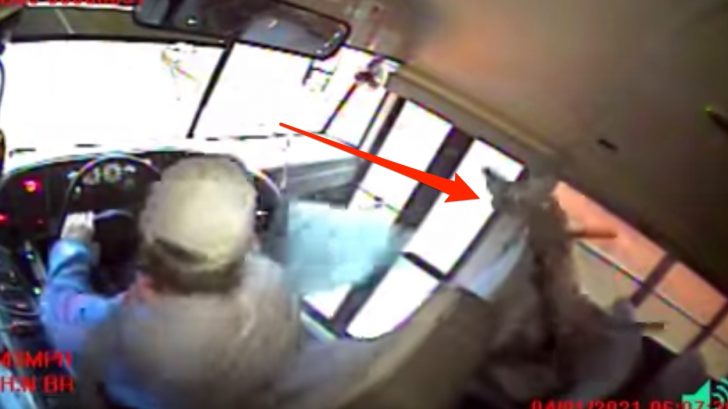 A Powhatan County Public School bus driver was driving with a full load of kids when a deer jumped out into the road and broke through the front windshield of the bus and landed on a student.

Footage of the incident was captured by the school bus security camera on April 1st, but this was not an April fool’s joke. Authorities said that the bus was on Old Buckingham Road at 6:07am and was heading back to Powhatan High School when it happened.

According to Brian Bartlett, interim director of transportation, the bus driver said one deer ran out in front of him and he missed it, but a second deer jumped out and that’s the one that went through the glass.

“The bus hit it and it rolled up the hood of the bus and through the windshield. The deer jumped up at about the time the bus hit it,” Bartlett told Powhatan Today Newspaper.

The footage shows the bus driver trying to swerve and miss the deer but it crashes right into the window and lands on a student that was sleeping in the first seat. The deer frantically jumps around trying to figure out where it was and how to escape.

The bus driver opens the door and the deer manages to scrambles out of it. After the deer is out, he fully pulls the bus over to the side of the road and calls in to report what just happened.

“The students were checked out and nobody was injured in the accident,” Larry Johns said, assistant superintendent for finance, business operations, transportation, and food services.