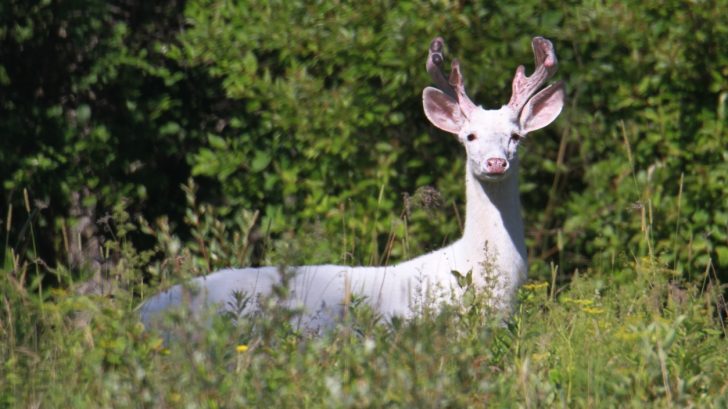 The Seneca Army Depot in Seneca County, New York is a massive 10,000-acre fenced-in area that was used in World War II to store radioactive materials for developing the atomic bombs.

Now the land is home to the world’s largest herd of all-white deer.

In 1941, the Seneca Army Depot was an army base active and in full service, but in the year 2000, it was closed down and there has been little done with the land since.

Some of it has been leased as storage units for companies, however, for the most part, most of it still remains uninhabited by people.

Wildlife is the only living thing allowed to roam free inside the fence and because of that, there is no interference from people. According to wildlife officials, more than 700 deer, with dozens of them all-white, have this protected utopia all to themselves.

They are not albino deer, but leucistic, and are much lighter than a typical deer. They have brown and black eyes and do not have red or pink like albino deer.

According to Merrian Webster, leucism is “an abnormal condition of reduced pigmentation affecting various animals (such as birds, mammals, and reptiles) that is marked by overall pale color or patches of reduced coloring and is caused by a genetic mutation which inhibits melanin and other pigments from being deposited in feathers, hair, or skin.”

Tours used to be offered by the Seneca White Deer Tours but they shut down in 2019 due to financial difficulties.

However, now people can view the deer with a self-guided or bus tour through Deer Haven Park, a section of the Depot staffed by organizers that work to preserve the habitat of these incredible creatures.

Watch a video below to see more of the all-white deer.