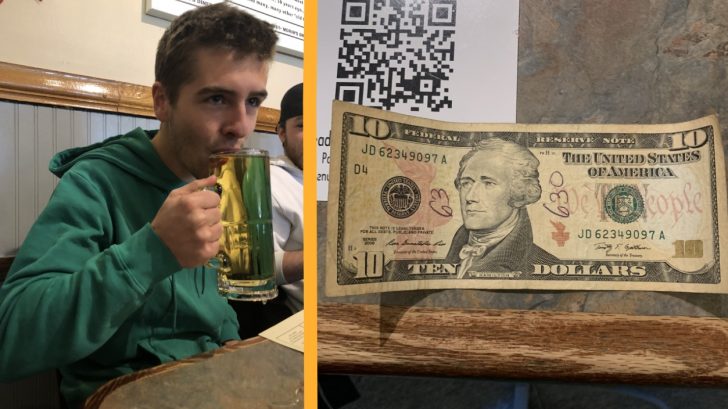 Matt Goodman from Taunton got the surprise of his life when his father, who is deceased, bought him his first beer to celebrate his 21st birthday.

“The morning of my birthday, we went out to breakfast and ordered that first beer and it was actually like he was there buying me my first beer,” Matt told CBS.

According to Matt’s sister Casey, their father John and Matt were very close. Unfortunately though, six years ago John passed away from cancer. However, before he left this world he gave Casey a 10 dollar bill and told her to give it to Matt on his 21st birthday so that he could legally buy him his first beer.

“It’s just something so typical that my dad would have done,” Casey said. “To buy his first beer. Him and my dad were so close and he’s had such a hard time anytime that a monumental moment comes up in his life that my dad’s not there.”

Casey gave the money to her mom to hold onto it and she placed it in an envelope and hid it in her closet until his 21st birthday. She said it was very hard to keep it a secret all these years but somehow she managed to do it.

What’s most beautiful about the story is Matt never knew that his father gave her the $10 until the night before his 21st birthday and was surprised to receive the gift.

“It was so nice that my dad, six years ago before he passed had the foresight to think about a time like this knowing he wasn’t going to be there for my graduation or some of the bigger things in my life so he thought about something he could be there for, even if it wasn’t physically.”

Matt shared a picture of the 10 dollar bill and the pint of beer be bought with it on Twitter. He also did an interview with CBS. Take a look at that interview below.