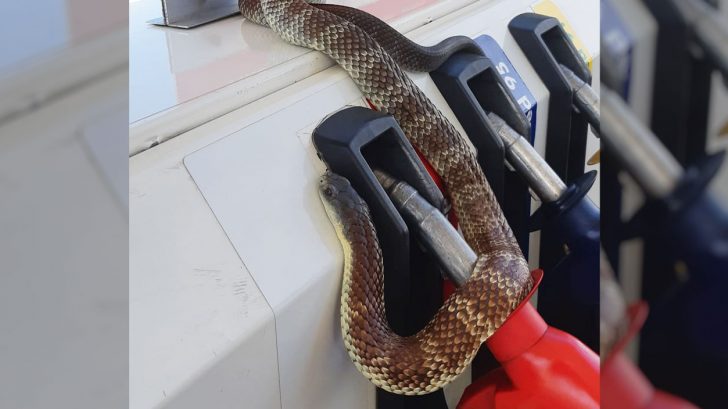 Pretty much everything in Australia is deadly and wants to kill you – even gas stations are deadly.

On September 15, 2020, a deadly snake was found on top of a gas pump at a station in Melbourne, Australia. Identified as a tiger snake, the five-foot-long creature wrapped itself around the pump after sliding out from under a car.

Local snake catcher Raymond Hoser was called to remove the snake. He mentioned in a Facebook post that these deadly snakes like to curl up inside warm engine compartments and many others have been popping up in random places.

“Most Australians know of tiger snakes and are aware of their fearsome reputation, though few people will ever encounter one. Unfortunately this species is much maligned because of its aggressive nature and toxic venom; however the tiger snake should be recognized as a great survivor, superbly adapted to some of the most inhospitable environments in Australia.”

Tiger snakes are shy and generally prefer to escape rather than engage in conflict. However, if one is cornered or feels threatened it can become aggressive and make strikes towards its aggressor. The venom of the tiger snake is strongly neurotoxic and causes blood cells to clot in the bloodstream. Combined with the snake’s large size, it is considered extremely dangerous to humans.  Anyone suspected of being bitten should seek medical attention immediately.

For more on the story, watch the video below.