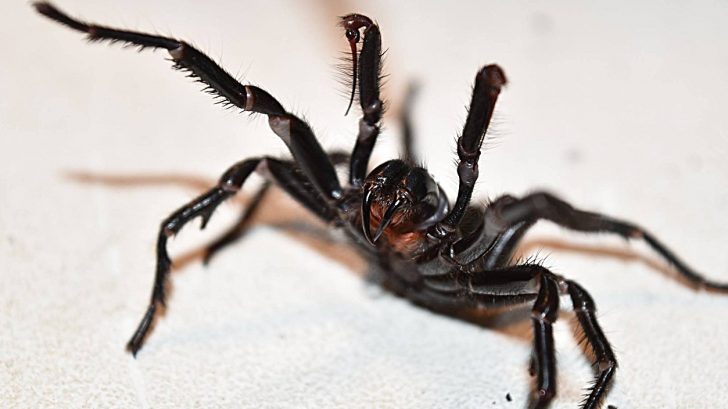 The Australian Reptile Park gave out a strong warning on January 21st, 2019 that Australian funnel-web spiders may begin to burst out of their dens in high numbers. They say this is due to the heavy rain Australia has experienced over the weekend mixed with the warm temperatures creating optimal tropical conditions for these spiders to thrive in.

Did you know you can watch our keepers milk Funnel Web Spiders as a part of the lifesaving antivenom program?! Come and…

Australian funnel-web spiders are highly venomous and are known as the deadliest spiders in the world according to the Australian Museum. Fortunately, though, modern first-aid techniques and antivenom have saved many people’s lives who have been bitten.

Only 13 people have ever been recorded dying from a male funnel-web spider bite, however, 30-40 people are bitten each year by them. They have large and powerful fangs that can penetrate fingernails and soft shoes. The spider itself can grow up to two inches in body length and mostly lives on the forest floor.

Jake Meney from the Australian Reptile Park says because of the potential explosion of active funnel-web spiders that may occur over the next few days, he asks that adults try to safely capture them to use for antivenom. However, always keep your hands 20 centimeters away from the spider.

“We rely on public donations of funnel-web spiders to build up our milking individuals,” Jake said according to ABC Australia.

Jake says you get a plastic or glass jar with a lid and use a spoon to usher it into the jar with. You can put a cotton ball dipped in water or wet dirt in the bottom of the jar before ushering it in to give it something to drink and so the spider doesn’t dry out. Then drop it off at the Australian Reptile Park or their drop off centers as explained in the video below and they will milk it to create the antivenom.

?WARNING! FUNNEL-WEB SEASON IS HERE! ?We are issuing a message of warning to the public as recent wet weather conditions followed by hot days have created perfect conditions for funnel-web spiders to thrive.We're asking for any collected spiders to be brought to the park to contribute to our lifesaving antivenom program! ?️