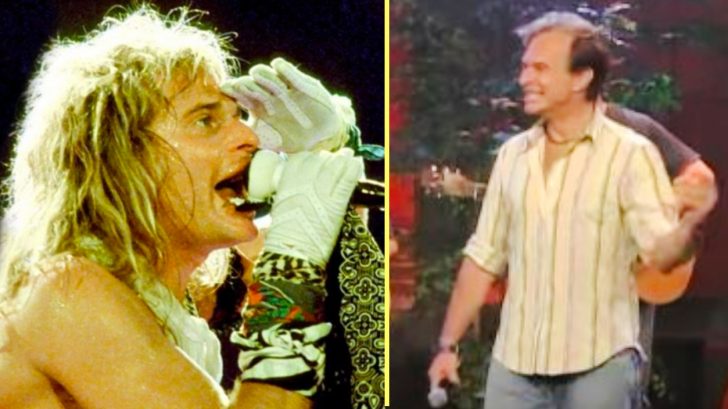 Van Halen‘s frontman, David Lee Roth couldn’t miss the opportunity to release a pun-worthy version of his music on 6/6/06. He called the album Strummin’ With The Devil: The Southern Side Of Van Halen – a twist on his hit song “Running With The Devil.” During a Jay Leno special, Roth gave everyone an unforgettable preview of one of the country-fried songs on his album.

The original 1983 version of “Jump” reached number one on both the US Billboard Hot 100 and Mainstream Rock charts. An upbeat anthem, it was often played before different sporting events to pump up the athletes and the crowd. It even was listed by the Rock and Roll Hall of Fame and Museum as one of the “500 Songs that Shaped Rock and Roll.”

Leno welcomed the artist to the stage and instead of the smog machines and light shows Van Halen is known for, the set kicks off with a fiddler playing the upbeat opening to “Jump” in a bluegrass tone.

After a moment, Roth walked on stage, trading in his trademark big hair and spandex for a button-up and blue jeans. He had an excited smile on his face as he snapped along and said, “Going to work now.”

With that, he jumped in and adds his vocals to the fiddle, upright bass and banjo. The crowd begins clapping and stomping along to the country-fried rendition of the song.

While Roth belted the southern version of his classic hit out with a bit of twang – he couldn’t help but add in his rock-and-roll style when he went for the high notes.

Just when it seemed his performance was coming to an end, the crowd’s loud applause persuaded him to sing the chorus one more time.

Stummin’ With The Devil peaked at 66 on the U.S. Billboard Top Country Albums and Roth continued to promote the bluegrass record on various late night talk shows. During their last known performance, the band reverted back to the original style of the song when playing at the Hollywood Bowl in Los Angeles.

We’ve never seen a Van Halen song played like this before. Watch the full video below and share your thoughts in the comments!