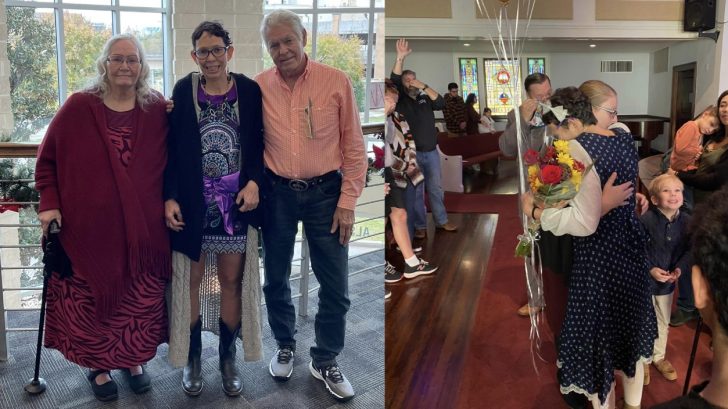 A family in Texas is overjoyed this holiday season to have finally been reunited with their daughter after she was kidnapped more than 51 years ago.

The story started when 22-month-old Melissa Highsmith was living with her mother Alta Apantenco and father Jeffrie Highsmith in Fort Worth and was being watched by a babysitter who kidnapped her in August 1971.

The family frantically searched for their daughter for decades and never knew what happened to her, celebrating her birthday every year and praying that they would one day see her again.

In 2022, the family submitted a DNA case to 23andme, a genetic analysis company that connects lost families to their relatives based on DNA results.

From there, they worked with an amateur genealogist of the company to help them comb through public records where they learned they were related to the children of a woman in Fort Worth named Melanie.

“We saw her pictures, found out about her birthmark, and realized her ‘birthday’ is so close to our Melissa,” Sharon Highsmith, Jeffrie Highsmith and Alta Apantenco’s daughter, wrote in a Facebook post on a page dedicated to finding Melissa. “WE KNEW beyond a shadow of a doubt that this was OUR GIRL.”

Finally, on Saturday, November 26th, Melissa was reunited, celebrated, and saw her parents, sister Victoria Highsmith, sister Sharon Highsmith, and more family members in a church for the first time in half a century.

“We have worked with law enforcement and we’ve tried to do our own private family investigations. For decades, my parents have chased leads, hiring their own labs and investigators. And yet, these DNA tests, which are available to anyone, helped us find our lost loved one,” Sharon Highsmith said in a statement. “It’s overwhelming and incredible to me.”

Melissa Highsmith told CBS News Dallas-Fort Worth that she learned about her kidnapping after her real father Jeffrie reached out to her on Facebook.

At first, she thought it was a scam but after recovering the details following the 23andme results, she realized this was very real, and they’d been living in the same city, Fort Worth.

“It’s overwhelming, but at the same time it’s the most wonderful feeling in the world,” Melissa said.

Melissa, who went by the name Melanie her whole life said when she asked her caretaker “is there anything you need to tell me,” that’s when her caretaker, who has not been named, said that she knew about her actual identity.

The Forth Worth Police Department also added that they are “overjoyed” to hear about Melissa being reunited with her family again after being missing for so long.

They said they are conducting an official DNA test to confirm Melissa Highsmith’s identity and will be working with the family and investigators to dig deeper into her disappearance.

“Even though the criminal statute of limitations expired 20 years after Melissa’s 18th birthday, the Fort Worth Police Department is committed to completing this investigation to uncover all of the available information concerning Melissa’s abduction that occurred 51 years ago,” the department told USA Today.

Footage Of Them Speaking About Reuniting In The Video Below