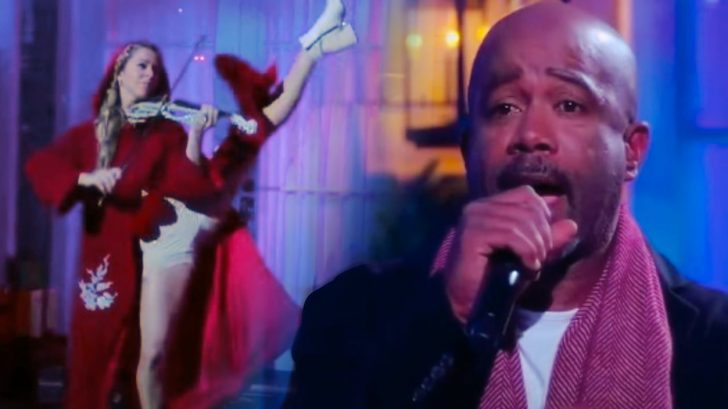 Every year, the CMA celebrates the holiday season by hosting its CMA Country Christmas special. This year, the special was hosted by country star Thomas Rhett and his wife Lauren Akins.

Some of the performers included Rhett, Tim McGraw, Lady A, Gabby Barrett, and Darius Rucker. In Rucker’s case, he delivered a captivating performance of the beloved Christmas carol “What Child Is This?”

He was joined by violinist Lindsey Stirling, who is known for performing choreographed dances while she plays the violin. Stirling was also the runner-up on Dancing with the Stars‘ 25th season.

Both Rucker and Stirling have performed on CMA Country Christmas in the past, but never together. So when fans heard they’d be uniting to perform “What Child Is This?” for the 2020 special, they were excited to say the least.

Rucker and Stirling released a recorded version of their collaboration in the leadup to CMA Country Christmas. Their recording dropped on Thanksgiving Day.

Since that recording was released a few days before CMA Country Christmas, fans had some time to anticipate how the performance would play out in a live setting.

Finally, they got the chance to see the duo’s in-person collaboration when CMA Country Christmas aired on November 30.

Their performance opened with Stirling slowly playing her violin as she strolled across the stage that had been transformed into a winter wonderland. Twinkling Christmas trees surrounded her, serving as the main source of light on the dimly-lit stage.

Then, Rucker jumped in and began singing while Stirling stood by. She eventually jumped in again, and began dancing around on stage as she played.

Tune in to the video below to watch Rucker and Stirling’s spectacular Christmas performance. It was a true work of art.