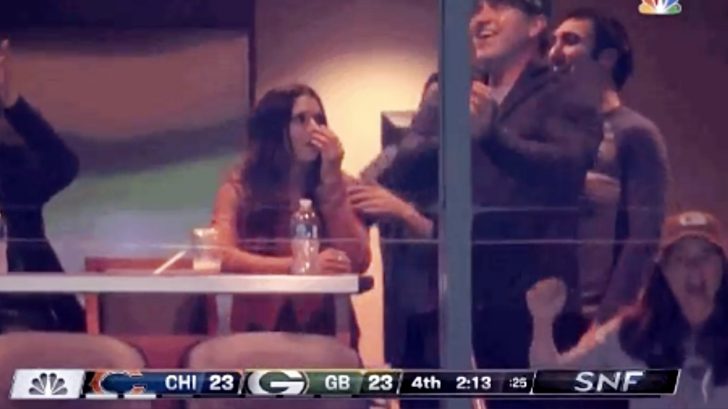 Patrick and Rodgers have been dating since earlier this year when she confirmed the rumors that she’d moved on to someone new after ending her five-year relationship with fellow NASCAR driver Ricky Stenhouse Jr.

It appears too that Ricky has also moved on…

Rodgers appeared trackside for Danica Patrick’s final running of the Daytona 500 earlier this year. Unfortunately, Patrick crashed out and lost her chance to win during one of her final two races as a motorsports veteran.

Goodbye race track, until May. Thank you for the memories Nascar and Daytona. ? . . @jonferrey ? follow @playerstribune and @godaddy for more pics. #danicadouble

Now, she’s hanging out in a fancy luxury box during this heated game between the Green Bay Packers and Chicago Bears – a combo that pitted her lover’s team against her family’s favorite.

Watching this nail-biting and tense game from the skybox, Patrick saw her quarterback boyfriend take the team from a losing 20-0 position all the way to the top and win the game in a shocking twist that ended at 24-23.

As her face was plastered across every tv screen in America, commentators discussed her relationship with Rodgers before he came back to the field from a knee injury.

She looked on with a plain expression, awaiting the next change up in this rollercoaster game – and not too much time later, she was overcome with emotion as her jaw dropped seeing the final score.

Not only was she shocked, but the entire skybox was filled with overjoyed fans. Check out her expression below and watch the spectacular comeback in the video!