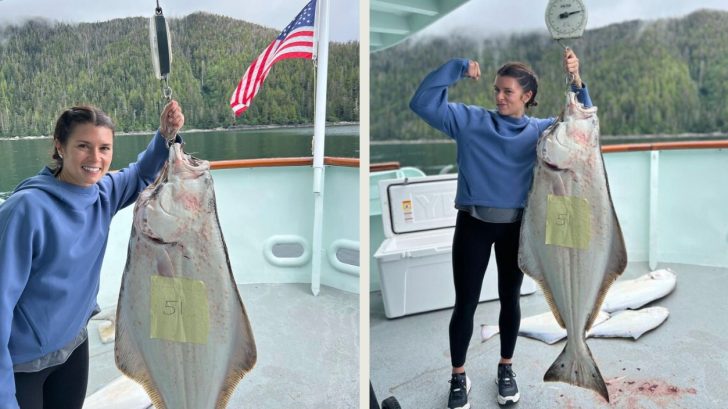 On Tuesday (Aug 2), former IndyCar and NASCAR driver Danica Patrick recently took to Facebook to show off a few new photos of herself posing with a massive fish she caught while on a fishing trip.

She captioned the carousel of photos, which also included pictures of filleting and packaging the fish, “Did you know halibut have eyes on both side at first but it moves to one side and swims on [its] side on the bottom of the ocean? Neither did I. Caught a 51 LB halibut! I got a special hat even – 50+ LB club.”

The 40-year-old Wisconsin native is living her best life and her followers enjoyed commenting on her catch.

One joked in the comments, “Now we know why you went fishing. Just for the Halibut.”

Another added, “It’s almost bigger than you!”

Danica recently opened up to Yahoo Life saying that when she’s not on the high seas catching fish, she is often speaking about important health issues. She opened up to the outlet about removing her breast implants, which she believes caused a lot of chronic health conditions for her.

“Hair loss and weight gain, and nothing I did fixed it. And I couldn’t lose weight and then I lost my cycle,” she explained. “It’s not something that all of a sudden you get [the implants] in and then you’re sick the next day. It’s such a gradual process.”

Recently, Danica posted a photo of herself to social media explaining how she has learned to love her body again.

“I wish I could [have] told this 32 year old girl that boobs won’t make you more perfect or have it all or be more feminine. These were my reasons and to me these narratives are the problem. Implants just feed into it. Culture feeds into it. Social media feeds into it. Filters feed into it. Unhealed trauma feeds into it,” she wrote in the caption of the Instagram photo. “The work is always an inside job. The real question is — how can I do the emotional work to see myself as perfect, having it all, and feminine? When we do that, we won’t seek outside validation or a way to get it.”