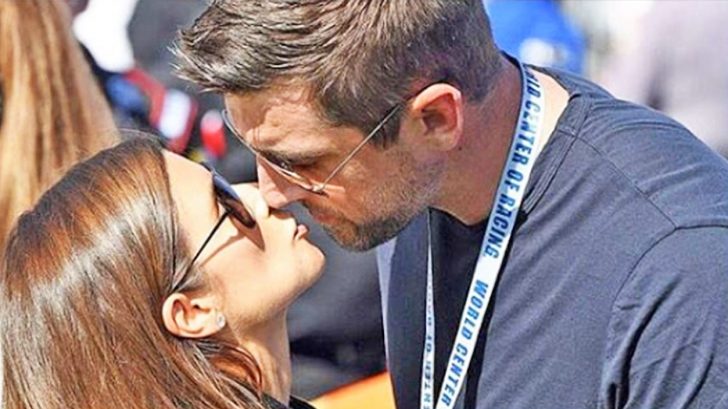 This year’s Daytona 500 was full of excitement, as always. Richard Childress Racing driver Austin Dillon took home his first ever first place finish at what is considered the most prestigious race on the NASCAR calendar. Bubba Wallace also made history on Sunday (Feb. 19) in Daytona, becoming the highest-finishing African-American driver in the 60-year history of the Great American Race, placing second.

It was also a historic event for Danica Patrick. The Daytona 500 served as her very last NASCAR race before heading for retirement. While the way she finished the race, in 36th place, was not the way she wanted to end her NASCAR career, what happened before the race had people talking.

In January, a couple months after her break-up from fellow driver Ricky Stenhouse Jr., Patrick was seen at dinner with Green Bay Packers quarterback Aaron Rodgers, which fueled dating rumors. Not long after, Patrick did, in fact, confirm that the two were dating.

Prior to the big race, Patrick shared a series of Instagram photos using the caption, “Doing Daytona with all the people that mean the most to me,” which included two photos of Rodgers.

Doing Daytona with all the people that mean the most to me. ? . . @jonferrey ? follow @playerstribune and @godaddy for more pics. #danicadouble

Not only did that get people talking, but so did Rodgers’ good luck kiss he gave to Patrick before competing in her final Daytona 500 race. That kiss seemed to get more attention than her actually driving in the race!

Fans of both athletes were freaking out on social media, some even trying to come up with their “couple name,” including commentators Jay Onrait and Dan O’Toole of SC with Jay and Dan – Presented By Tim Hortons.

#JayAndDan found out #DanicaPatrick and #AaronRodgers were a couple on Monday night ?

The two seem happy together, and we wish them the best of luck! Take a look at the kiss in the video below, which was taken by a fan named Claire Lang.

Met my QB @AaronRodgers12 today @DISupdates ! I introduced myself and talked to him for a few min – super nice, extremely calm and kind. Got this video before @DanicaPatrick got in the car! 🙂 🙂 pic.twitter.com/owobv3AAAl