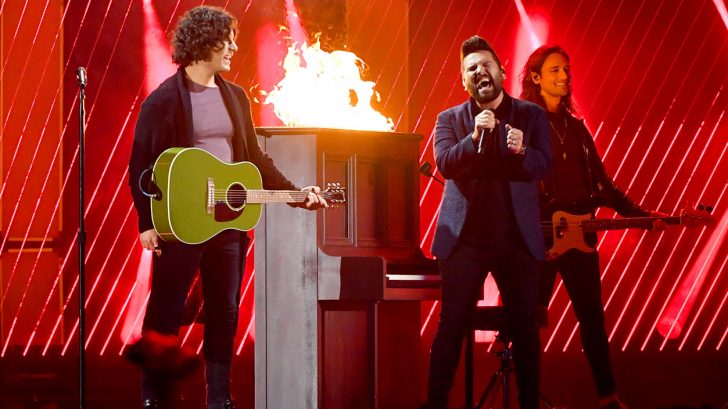 2018 has been a record year for Dan + Shay. With the release of their hit single “Tequila” followed by their self-titled album Dan + Shay, the duo had a series of successes they never saw coming. Humbled by their array of different nominations for this year’s CMA Awards, the duo wanted to put on a performance to thank their fans.

Background Behind The Duo

The country singin’ duo is composed of singer/songwriters Dan Smyers and Shay Mooney. The two met in 2012 while living in Nashville and just a year later they had already released their first single together “19 You + Me.” It wasn’t long before the talented pals released their first debut album as a duo, Where It All Began. Dan + Shay began touring with popular country stars such as Blake Shelton and Hunter Hayes where they would start gaining their loyal fanbase.

Their hard work paid off when 2018 became one of the best years of their career. Their hit song “Tequila” made it to #1 on the Billboard‘s US Country Airplay chart and has since held a spot on all music charts. In the same year, the duo released album Dan + Shay which also reached #1 on the Billboard chart. The two explained to fans the importance behind this album being the first time they felt they were truly able to express themselves through their music.

Just got word that #TEQUILA is the most streamed country song released in 2018! ?

On top of their personal successes, Dan + Shay was also nominated for four awards at this year’s 52nd Annual CMA Awards. A list of their nominations as followed:

Regardless of the outcome, the duo feels humbled to be nominated for so many amazing awards.

Their performance started off with a beautifully-lit stage in the shape of a cross. Singing their hit single “Tequila,” Mooney is on the piano while Smyers is on guitar. The duo harmonizes gracefully throughout the tune for a much-anticipated performance. During the bridge, when the duo sings their famous line “sky high in Colorado,” flames went up for a powerful moment. The duo put on a phenomenal show.

We will NEVER stop being obsessed with this song! Go @DanAndShay, go! #Tequila #CMAawards pic.twitter.com/O4C5eejpFq