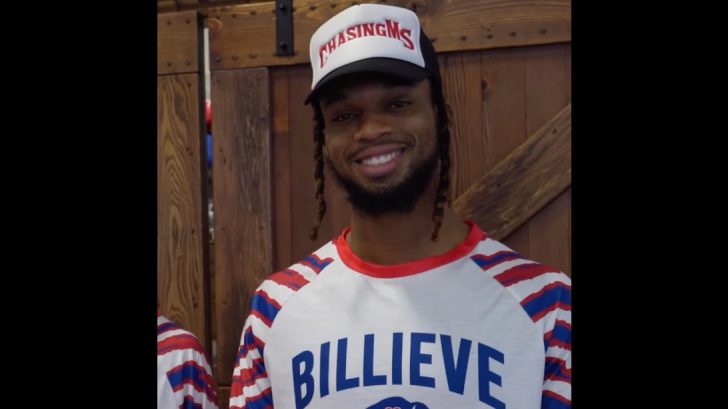 The first week of 2023 began with NFL star Damar Hamlin collapsing on the field while his Buffalo Bills played at the Cincinnati Bengals.

Hamlin was tackled during a play in the first quarter of the game on Monday night (Jan 2). He got up immediately and then collapsed. He received immediate medical attention by paramedics who administered CPR for several minutes. It’s been reported he was down “for at least 15 minutes.” He was then taken off the field in an ambulance and taken to University of Cincinnati Medical Center.

That night they inserted a breathing tube and sedated him. The Buffalo Bills revealed that Hamlin suffered a cardiac arrest.

Damar Hamlin suffered a cardiac arrest following a hit in our game versus the Bengals. His heartbeat was restored on the field and he was transferred to the UC Medical Center for further testing and treatment. He is currently sedated and listed in critical condition.

Each night Hamlin was sedated, he was showing “remarkable improvements,” per statements from friends, family members, and doctors.

On Wednesday (Jan. 4), the Bills released the following statement:

Damar remains in the ICU in critical condition with signs of improvement noted yesterday and overnight.

He is expected to remain under intensive care as his health care team continues to monitor and treat him.

In an update on Thursday morning (Jan. 5), the Buffalo Bills tweeted that “Damar has shown remarkable improvement over the past 24 hours. While still critically ill, he has demonstrated that he appears to be neurologically intact. His lungs continue to heal and he is making steady progress.”

#Bills S Damar Hamlin opened his eyes last night and is responsive. Truly incredible. One thing that's very clear from speaking to those close to him: They are endlessly appreciative of the medical care given to Hamlin on the field immediately, then over the last 72 hours.

Our boy is doing better, awake and showing more signs of improvement. Thank you God. Keep the prayers coming please. All love 3!

CNN reports that Hamlin’s agent told them the NFL star is awake and “has been holding hands with family in the hospital.”

On Wednesday (Jan. 5), Adam Schefter reported that Mario Hamlin, Damar’s father, had a Zoom call with the entire Bills team to update them on Damar’s progress.

“In the words of one source, ‘the team needed it,'” he wrote.

Damar Hamlin’s father, Mario Hamlin, addressed the entire Bills team on a zoom call Wednesday to personally update everyone in attendance on his son, per source. Mario Hamlin informed the Bills that Damar was making progress and, in the words of one source, “the team needed it.”

Well, the improvements kept on coming! On Friday (Jan 6), the Bills said, “Per the physicians at UCMC, Damar’s breathing tube was removed overnight. He continues to progress remarkably in his recovery. His neurologic function remains intact and he has been able to talk to his family and care team.”

Per the physicians at UCMC, Damar’s breathing tube was removed overnight. He continues to progress remarkably in his recovery.

His neurologic function remains intact and he has been able to talk to his family and care team.

Not only that, but he also FaceTimed into the Buffalo Bills’ team meeting to talk with his teammates and coaches! Per a tweet from the Bills, he told them, “Love you boys.”

Damar Hamlin FaceTimed into our team meeting today to talk to players and coaches.

What he said to the team: “Love you boys.” ❤️ pic.twitter.com/8dorrWNaxt