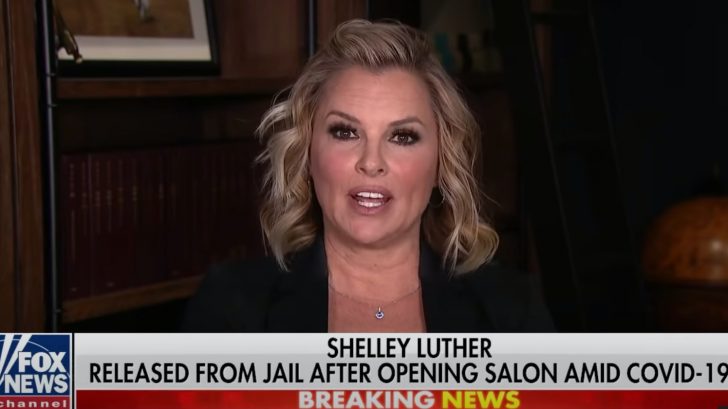 One of the biggest stories surrounding the re-opening of some states amid the COVID-19 pandemic is about one small salon owner in Dallas, Texas who was recently sentenced to jail and fined for opening her salon against current restrictions.

Shelley Luther, who owns Salon A La Mode in Dallas, appeared in court on Tuesday, May 5th, 2020 to answer to a judge for the citation issued by the city for opening up her beauty salon before the restrictions on that business type had been eased as part of the reopening.

The judge told Shelley Luther she
could avoid jail time if she apologized, admitted she was wrong, and agreed to close her hair salon until it was allowed to open.

The local judge, Eric Moyé, sentenced Luther to seven days in jail along with a $7,000 fine for the violation but told her that she could avoid spending any time behind bars if she apologized, admitted wrongdoing, and agreed to keep her salon closed until the restrictions had been officially lifted.

Luther chose not to apologize and ended up being taken into custody. Quickly thereafter, swift changes were made by the Texas Supreme Court and Governor Greg Abbott with the Supreme Court lifting her sentence to free her, and the Governor removing jail time as a penalty for violating opening restrictions.

#NEW @SenTedCruz just arrived at Salon A’ La Mode in Dallas to get his 1st haircut in 3 months. Owner Shelley Luther was released from jail yesterday. The case has become a rallying cry for conservatives. @realDonaldTrump & @GovAbbott discussed it too. https://t.co/fSZZgIvqgr pic.twitter.com/AZfJtgfGZI

Once Shelley Luther was out of jail, she gave her first network television interview with Hannity on Fox News.

“We were shut down March 22, so it had been several weeks that the government was kind of telling us the [small business] money was coming. The Dallas County Judge, Clay Jenkins, kept pushing back the date of when we would open weeks out in advance before we would hear any new comings of what was going on with masks or whatever,” Luther said. “When he finally pushed it back a final time I just woke up one day and I said, ‘I have to open, my stylists are calling me, they’re not making their mortgage,'” she continued. ” … I’m two months behind on my mortgage.

She goes on to state that she had her stylists who work in the salon calling her and telling her they were thinking about doing underground work and going to people’s homes to do it, but Luther says that was probably a worse idea in her opinion.

“I just said, ‘You know, that’s not a good idea because we can’t control the environment there. We don’t know if it’s been disinfected or anything like that,’ and I just decided I would open.”

With that, she said, she decided to open against the COVID-19 guidelines for small business and said that even though she defied the order, she implemented strict sanitation protocols and social distancing for her staff’s safety as well as customers.

“We made sure that I had no clients waiting inside the salon at all. I had chairs six feet apart outside of the salon … and when the stylist was ready and wearing a mask — we didn’t let any clients come in without a mask — they instantly sanitized their hands, the hairstylist sanitized their hands. They came in, they did the cut and that person left.”

Now that Luther is out of jail and has gained a great deal of traction with the media, she is becoming somewhat of a champion for small businesses that demand to reopen against state and local restrictions.

Watch her full interview with Hannity below.