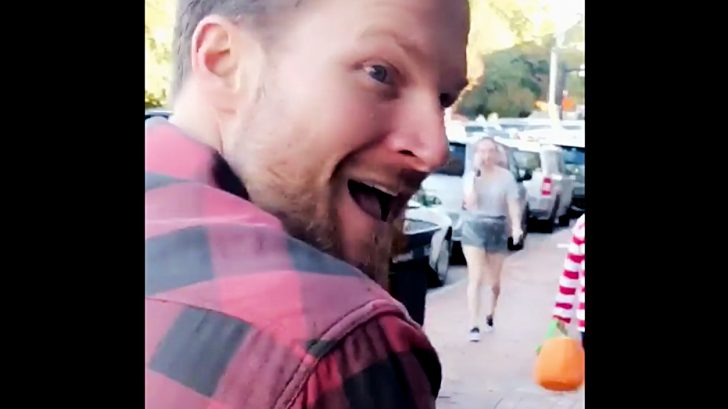 During his very first year trick-or-treating with his brand new baby girl, Isla Rose, this beloved NASCAR star got quite the surprise when he began noticing some of the other costumes out and about.

Dale Earnhardt Jr. and his wife Amy Earnhardt welcomed their little bundle of joy into the world on April 30th, 2018 and they’ve had the time of their lives throughout this joyous new chapter. Now, these new parents are experiencing the joy of Halloween in a whole new way.

This little Halloween celebrator was dressed up as one of the most adorable skeleton’s we’ve ever seen and she clearly had a ball when they took her to the pumpkin patch earlier in the season. All-in-all, her first fall festivities seem to be a delightful time for everyone – including mom and dad!

We had a fun afternoon @patterson_farm ! Love having friends and our babes together! Isla really took to the corn pit. And she literally had about 30 pieces of corn in her britches after.

Hitting the streets of historic downtown Mooresville, North Carolina, Dale Jr. and Amy toted little Isla around while collecting candy alongside many of the other residents in this charming Southern community.

Strolling down the sidewalk, Dale Jr. spotted someone in a very familiar costume…

The kid, who couldn’t have been much older than eight years old, was sporting a familiar fire suit style costume decked out in some colors that had been part of Dale Jr.’s history – and he knew right then exactly what this kid was supposed to be: him!

Yep – one of the first costumes he spotted while trick-or-treating was actually himself! Luckily, Amy was recording on her phone during that time and captured his picture-perfect reaction!

“Went downtown for trick or treating at local businesses. Saw a Dale Jr costume,” he captioned the video.

Check out the full video and his hysterical reaction below!