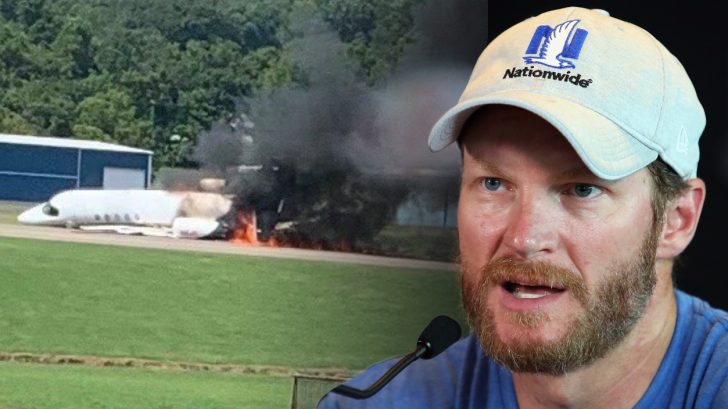 Just yesterday, on August 15th, 2019 – former NASCAR driver, Dale Earnhardt Jr. was involved in a horrifying plane crash as his small Cessna jet crashed at a municipal airport just outside of Bristol, Tennessee.

Here are the remains of Dale Jr.’s plane. Sheriff just gave a briefing to media. Incredible all passengers were able to escape this. There’s still fuel burning in a ditch nearby. pic.twitter.com/dZ0PkpHuK5

Dale Jr. was traveling with his wife, Amy Earnhardt, their daughter Isla Rose, and one of their dogs when their plane attempted to land at Elizabethton Municipal Airport. The plane tried for a landing, but ended up crashing into the end of the runway and plowed through a fence before catching fire.

Earnhardt and his family were transported to a local hospital following the crash, and he was discharged from the hospital later that same day. Neither Amy nor Isla were admitted to the hospital.

Currently, the FAA and NTSB already are investigating the crash, with two investigators already on-site with local police and firefighters working to preserve as much evidence as they can.

Dale Jr. was traveling to Bristol, Tennessee for this weekend’s upcoming race. He even was spotted at the track just hours after the crash.

Not a great photo but appears DaleJr has arrived at the track. WCYB reporter had followed from the hospital to the track … pic.twitter.com/Dro8p8dNPW

The famous NASCAR star has been working as a broadcaster and analyst for NBC Sports ever since he turned in his helmet and driving gloves after a series of concussions several years ago.

Now, NBC Sports has issued a statement that explains Dale Jr. has been pulled from the schedule for the time being. They do say he will be back before the Southern 500 at Darlington…but it remains to be seen if that will actually happen.

DaleJr will spend the weekend with his family and not be on air: pic.twitter.com/ZnPS7SLQYP

“We’re incredibly grateful that Dale, his wife Amy, daughter Isla, and the two pilots are safe following today’s incident,” NBC Sports said in a statement. “After being discharged from the hospital, we communicated with Dale and his team and we’re all in agreement that he should take this weekend off to be with his family. We look forward to having him back in the booth next month at Darlington.”

Watch the full video of NBC Sports’ coverage of the plane crash below.